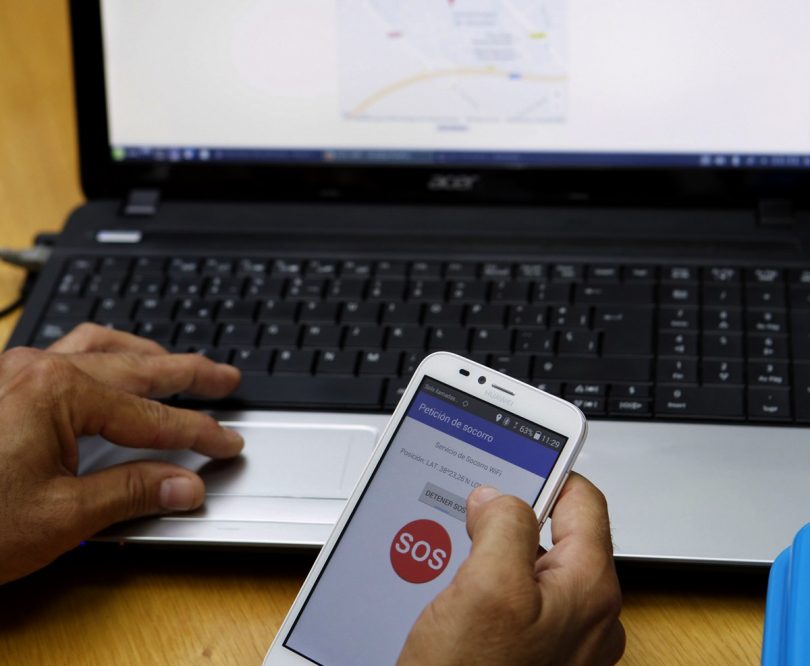 Researchers of the Universidad de Alicante (UA) have developed new technology that makes it possible to locate people who have suffered an accident by Smartphone where a speedy rescue is essential to save lives – even in remote locations without a phone signal. The system can also be used in emergency situations that arise as a result of earthquakes, floods or forest fires, where mobile phone infrastructure is often rendered useless.

“We have designed an application (app) that can be incorporated to any Smartphone and that, without a signal, emits a Wifi signal which in turn acts as a distress beacon over a distance of several kilometers”, explains the creator of the technology and professor at the UA’s Department of Physics, Systems Engineering and Theory of the Signal of the Higher Polytechnic School, José Ángel Berná.

This signal contains the location (coordinates) of the person who has suffered the accident or disappeared and is using the Smartphone emitter, along with a short message that “can be altered depending on the situation, with examples such as ‘I am injured’, ‘I am disorientated’ or ‘I need help’”, specifies Berná.

In order to detect the distress signal, the researcher has also created a light (half a kilo), portable receptor device which rescue teams or mountain shelters could use. This device has a small antenna and connects to the Smartphone of the search party.

When an accident occurs, the victim only has to activate the mobile phone app, which will in turn emit the distress signal periodically – for hours or even days, even if he or she is unconscious – indicating the coordinates of its location.

According to Berná, there have already been tests done on the ground with this innovative system – an operative prototype was developed in early 2016 – with the Special Mountain Intervention Rescue Groups (GREIM) of the Guardia Civil and then with the Maritime Service of the Armed Forces and Maritime Rescue, the results of which were ‘interesting’. Therefore, during the tests performed on ground and sea it was confirmed that the device can pick up the distress signal of the emitting Smartphone up to a distance of two or three kilometers, respectively, although it may be possible to increase its reach.

Search tasks for disappeared or hurt people currently entail “a large cost in time and human resources”, explains the professor. On the other hand, Berná explains, the new system developed makes it possible to “optimise the search and decrease tracking time”, a vital aspect when taking into account that, “in the case of many deceased people, autopsies have revealed that they survived for several hours and did not die instantly, but it had been impossible to locate them on time”.

It also has the added benefit that it does not require visual contact with the victim, because as soon as they can detect a single signal, it will tell them its exact location, even if it lies several kilometers away or it is trapped among the rubble of a collapsed building.

At present “there is no system in the world that uses Wifi signals to geo-locate a Smartphone. There are devices that allow you to detect mobile phone signals from a Smartphone and pinpoint its location through triangulation, but it costs around EUR 80,000 and requires the use of a helicopter”, says José Ángel Berná. However, the system developed in the UA is more economical, “as its receptor has a cost that would allow its commercialisation for approximately EUR 600 if used by a large number of rescue teams”, he adds.

According to the researcher, the security committee of the Spanish Mountain Federation and the Guardia Civil rescue services believe that the features of this technology should already be integrated within an emergency system and should have institutional backing.

“We have sent information to the Ministry of Internal Affairs so they take this new feature that we  have developed into account and they study its possible addition to AlertCops, the citizen safety warning service of the State Security Forces”, Berná explains.