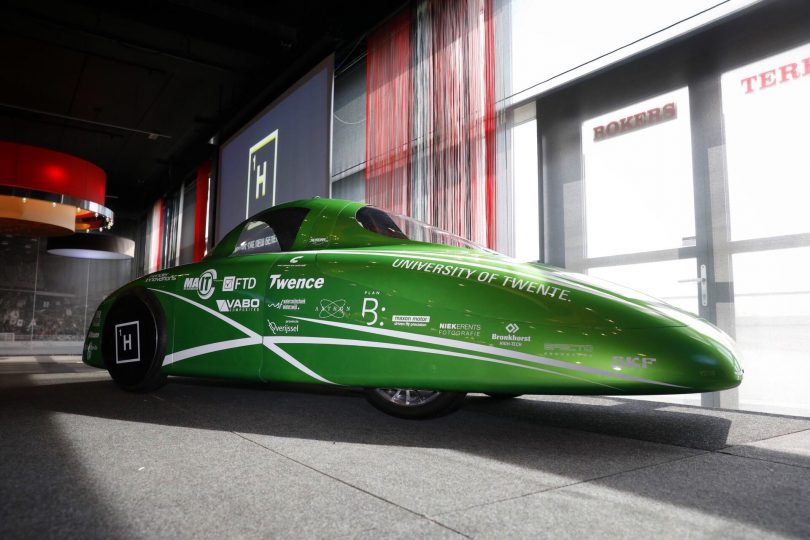 Green Team Twente unveiled its new H2∞ (‘H2INFINITY’) hydrogen car. The team is aiming for a podium spot at the Shell Eco Marathon, Europe’s major energy-efficiency race, which is to be held in London.

The team of students from Twente are aiming for a fuel consumption close to 1.000 kilometres per litre, which will at least equal last year’s third place. This will be the second time that the Eco Marathon will be held in London. The many hills on the course around the famous Queen Elizabeth Olympic Park led the team to modify the hydrogen vehicle’s entire powertrain. In fact, they completed this work last year.

Hydrogen car with efficiency of 99.1%

Green Team Twente is leading the way in the dramatic rise of the hydrogen car. Numerous car manufacturers are already bringing hydrogen-powered vehicles into mass production.

The current team has modified the gearbox, raising its optimum efficiency to 99.1%. This means the team could drive from Enschede to Geneva on just one litre of fuel (energy equivalent of petrol).

This year, the team is introducing yet another innovation – a special clutch. The team leader, Vitto Bonnemayers, explains that “This allows the driver to disconnect the wheels from the engine at strategic moments. That way, the car only encounters resistance from the road surface and not from its entire powertrain. The driver can operate this system at the press of a button.”
The previous team had already optimized the car’s aerodynamics (thus its shape too) to suit its speed.

Another new feature of the H2∞ is a steering wheel that was inspired by those used in Formula 1. The controls for all of the car’s functions, from the accelerator to the lights, are located on the steering wheel. Last year, the car’s rear suspension was upgraded to a double wishbone system, a significant improvement.

This system has arms which combine with their suspension point and the actual suspension of the wheel to form a four-armed mechanism. This ensures true independent suspension for all four wheels, while maintaining their vertical attitude. This system, too, closely resembles the one used in lightweight racing cars.

Finally, the team installed a ‘CAN-OtA (CAN bus over the air) system’. Vitto Bonnemayers points out that “This gathers data from all parts of the car, which can then be displayed in real time. It enables us to adjust our driving strategy during the race, to drive more efficiently, or to respond to situations in which systems do not function as expected. That is a massive advantage.”

The team will travel to London in early July to participate in the Shell Eco-Marathon, the largest fuel efficiency race in the world. The students hope to use this race to put the quality of Twente engineering in the spotlight and show that Green Team Twente is good enough to compete at the top. Unlike previous years, the focus this year is not only on efficiency but also on speed.