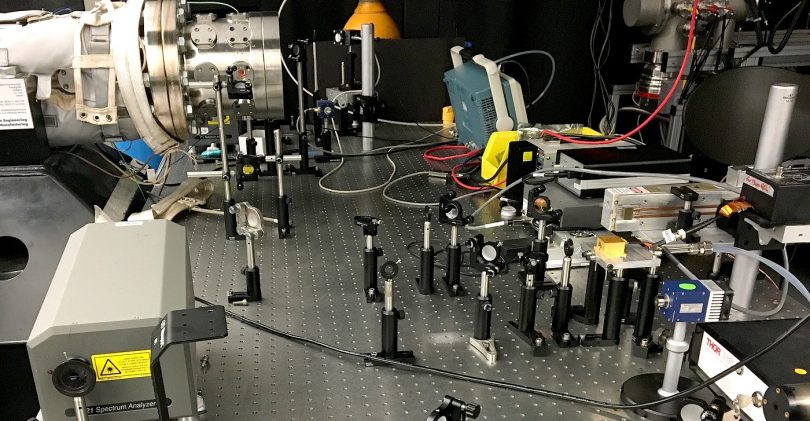 The decomposition of DEC was evaluated using a laser beam that passed through a complicated system of mirrors and lenses (bottom) before reaching the shock tube (upper left). © KAUST

Insight into the thermal decomposition of a potential fuel additive shows it could promote cleaner and more efficient combustion.

An additive for conventional fuel comprised of oxygenated organic compounds could help reduce the release of pollutants into the atmosphere during the combustion of fossil fuels. Researchers from King Abdullahh University of Science and Technology (KAUST) have now established how these potential additives decompose under combustion-relevant conditions.

Selecting a suitable additive for a fuel blend hinges on a good understanding of its kinetic behavior under combustion conditions. Because of their ability to burn cleanly, organic compounds that contain more than 33% of oxygen by mass have recently emerged as prospective additives for conventional fuel blends.

Specifically, diethyl carbonate (DEC), which comprises 40.6% of oxygen by mass, is expected to facilitate the clean combustion of diesel fuels. Also, thanks to its high boiling point, it can reduce the volatility of blended fuels, which is desirable in warm weather to minimize vapor buildup that blocks fuel lines. However, its thermal decomposition remains poorly understood.

To fill this knowledge gap, research scientist Binod Raj Giri and coworkers have now evaluated the effects of pressure and temperature on the decomposition of DEC. With collaborators from the University of Miskolc, Hungary, the researchers assessed the decomposition kinetics of DEC by monitoring the evolution of ethylene, one of the reaction products, in real time using a tunable CO2 gas laser. “We carefully selected the laser wavelength to minimize interferences from other reaction intermediates,” says PhD student, Muhammad AlAbbad, who performed these experiments at the University’s low-pressure shock-tube facility.

The researchers combined experiments with theoretical calculations to “provide a detailed and reliable kinetic picture for the decomposition and its products,” says Giri.

Giri’s team had previously discovered that the carboxylate functional group had a small effect on the decomposition of organic esters called ethyl propionate and ethyl levulinate. “This motivated us to find out whether the same phenomenon would happen for DEC, which bears one more oxygen atom in its carbon skeleton than esters,” he says.

According to Giri, these findings will shed light into the applicability of biodiesel fuels, which consist of various methyl and ethyl esters, to modern diesel engines and engine hybrids. Also, they will help clarify the blending effect of esters and carbonates with conventional fuels.

Giri’s team is currently investigating decomposition pathways for glycerol carbonate, which has a higher oxygen content than DEC. “This molecule might be even more attractive than DEC regarding soot reduction and environmental impact,” he adds.