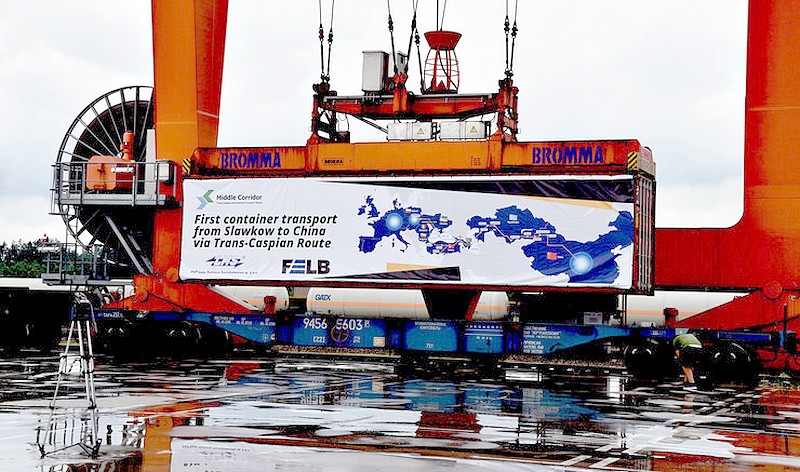 Far East Land Bridge (FELB) together with PKP LHS is organizing the first transport of containers on the Trans-Caspian route, from Sławków in the Silesia province of Poland, to Urumqi in Western China. The aim of the project is to test a new railway route between European and Asian countries.

“We run a route that is shorter than the sea route and much cheaper than air transport. Fits into the needs of freight forwarders and cargo handlers who want to avoid long-distance sea transport, skip queues for loading in Asian ports, efficiently cross the border with the European Union and ensure the delivery of just-in-time cargo”, says Zbigniew Tracichleb, CEO of the PKP LHS.

“Together with PKP LHS, we have big plans for using the westernmost 1520 mm wide railway line”, adds Wilhelm Patzner, Chief Executive Officer of FELB. “We are proud to open a new route, especially as the Trans-Caspian corridor responds to the growing demand for food exports from Europe to China. Italian kiwis or Polish apples, meat or sweets from all over Europe, will be able to be transported to China in less than 20 days.”

An agreement with the Russian railway system RZDL/RZD Logistics allows FELB’s containers to transit over the wide gauge sector (Russia, Belarus and Ukraine) with minimal internal stoppages and custom checks, and no diversions.

International Trans-Caspian Transport Route (TMTM) – Middle Corridor – leads from China, through Kazakhstan, the Caspian Sea, Azerbaijan, Georgia, the Black Sea and Ukraine. It reaches Sławków in Silesia, where the trans-shipment terminal on the broad-gauge line is located farthest to the West. Currently, Euroterminal Slawków can carry out approx. 280.000 TEU annually.