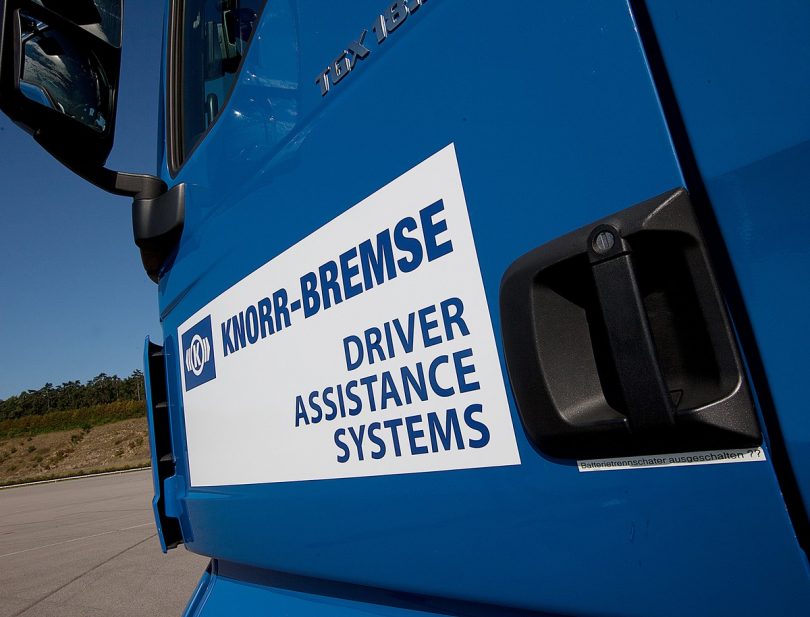 At the IAA Commercial Vehicles show in Hanover, Knorr-Bremse, the global market leader for braking systems and a leading supplier of other rail and commercial vehicle systems, will be demonstrating a truck that can master sections of the route on motorways/freeways in fully autonomous mode, including overtaking maneuvers. In addition, Knorr-Bremse will be showing extremely efficient ways of making such highly automated systems fail-safe.

In the outdoor New Mobility World arena at the fair, Knorr-Bremse will be demonstrating a prototype truck that can drive along motorways/freeways in fully autonomous mode. Traffic conditions permitting, it can also automatically overtake a slower preceding vehicle. In line with the motto “We pave the road to automated driving”, at booth 30 in hall 17, the company will be showcasing product and system solutions that lay the foundations for such highly automated vehicle systems, as well as illustrating how the complex automated functions can be rendered fail-safe in a cost-effective way.

According to Dr. Peter Laier, Executive Board Member of Knorr-Bremse AG responsible for the Commercial Vehicle Systems division: “In the next few years we’re going to see a gradual shift from more and more versatile driver assistance systems to automated driving and thus to vehicles that can temporarily take over the driving completely, freeing up the driver to handle other tasks or get some rest. The key to engineering such systems is a deepseated understanding of commercial vehicle dynamics, which are far more complex than in the case of cars. The millions of ABS, EBS, ESP, emergency braking and lane departure warning systems that we have in the field bear lasting witness to our expertise in this area and form the basis for us to leverage the potential that exists in driver assistance systems and automated driving.”

Dr. Jürgen Steinberger is a Member of the Management Board of Knorr-Bremse Commercial Vehicle Systems where he is responsible for the field of automated driving: “At the IAA we will be demonstrating our sovereign command of all three dimensions of highly automated driving functions – environment recognition, decision-making and actuation. Another decisive aspect is a smart redundancy concept: When the vehicle takes control, everything must be designed in a way that the vehicle cannot run out of control even if an electronic subsystem fails. Simply doubling up the critical components, as was originally demanded, makes no economic sense. At the IAA we will be demonstrating how a modern braking system can even temporarily replace the steering. Our redundancy concept for automated driving illustrates how to combine outstanding performance with cost effectiveness.”

At the IAA Commercial Vehicles show in 2016, Knorr-Bremse presented a prototype trucktrailer rig that was able to perform Autonomous Yard Maneuvering, covering a predefined course fully autonomously within an enclosed depot. That same year, Knorr-Bremse also presented a blind spot assistant that uses radar and cameras to monitor the sides of the vehicle. Instead of using door mirrors, the view along the side of the vehicle is shown on displays which, when a potentially hazardous situation is identified, can enlarge the relevant portion of the image. The driver receives a visual or acoustic warning signal if there is a cyclist or pedestrian in the danger zone.

The prototype truck on show at the IAA 2018 which can drive sections of the route on motorways/freeways in fully automated mode represents the current state of the art in the development of highly automated driving which Knorr-Bremse is actively driving forward. The foundations here are provided by Knorr-Bremse’s wide-ranging product portfolio that extends well beyond integrated braking and steering actuation.

Since 2000, Knorr-Bremse has sold more than two million ESP systems that ensure dynamic stability. Today, prototype vehicles are being equipped with new driver assistance systems for customers in Europe and Asia. In the USA, Knorr-Bremse has captured a major share of the market in this field with the autonomous cruise control, emergency braking, lane departure warning, and blind spot detection systems of its subsidiary Bendix. In China, Knorr-Bremse maintains innovation partnerships with two of the world’s largest commercial vehicle manufacturers with the aim of adapting these solutions to meet the specific challenges of the local market.

Redundancy: The real challenge behind automation

For more than a decade, the automotive industry has been developing automated driving functions in a bid to improve both safety and driving comfort. Beginning with driver assistance, these different levels of automation are progressively transferring responsibility from the driver to the vehicle. There is now a broad consensus in the automotive industry on the use of a six-level model to describe the graduated transition to full automation. This model is based on a paper published by the Society of Automotive Engineers International (SAEI) in late 2016. This document defines the role of the human driver at each of the six levels of automation and aims to provide both lawmakers and the automotive industry with a clear and unambiguous framework for defining regulatory provisions and technical specifications.

The technology underpinning the six-level model of driving automation spans three different dimensions – vehicle stability, maneuver planning and navigation/connectivity. The first of these dimensions comprises actions aimed at improving braking distance and preventing skidding or sliding. These actions are performed by means of ABS (Anti-lock Braking System) and ESP (Electronic Stability Program) functions which also form the basis for the next dimension – “maneuver planning”. Here environment sensors such as radar, video and laser-based systems are used in combination with active steering intervention to support automated vehicle control. The third dimension – navigation/connectivity – delivers the necessary extended environmental information and supports vehicle-to-vehicle and vehicle-toinfrastructure interaction over a wide geographic range.

As driving becomes automated, the question arises for manufacturers how they can ensure fail-safe operation in a cost-effective and reliable way. At the fair, Knorr-Bremse will show that, with the necessary vehicle-related know-how, failure of the active steering system can be compensated for without installing a redundant set of the relevant components.

Highly automated driving functions generally predicate the ability to constantly monitor the operational readiness of the various subsystems in the vehicle. Only when the entire system – including its redundancy structure – works as intended can the driver take care of other duties while the vehicle is in motion.

Along with traffic safety, the megatrends that will shape the mobility sector in the next few years will be connectivity, emissions reduction, electric mobility, and automated driving. Against this backdrop, Knorr-Bremse will be the systems partner for its customers going forward and will be driving forward developments in all four core areas in close collaboration with its customers. Knorr-Bremse will be presenting its portfolio of products and services at the commercial vehicle industry’s key trade fairs in 2018 – IAA and Automechanika. Activities and innovations on show will include pioneering traffic safety technologies and automated transportation solutions for highway and city applications, set out under the motto Shaping tomorrow’s transportation. Together.

Knorr-Bremse at the IAA Commercial Vehicles show in Hanover from September 20-27, on booth A30 in hall 17 and in outdoor area D107.
At the Automechanika fair in Frankfurt am Main from September 11-15, Knorr-Bremse will be on booth 91 and booth 98 in hall 3.0.