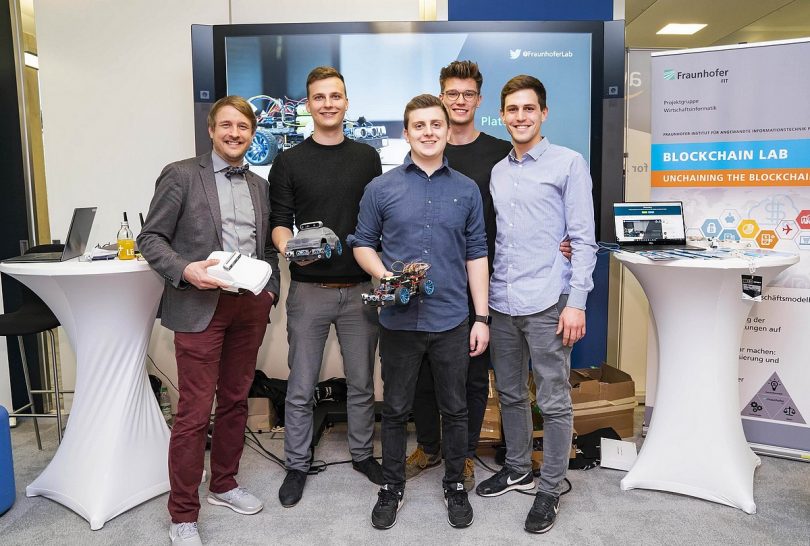 A student team from the University of Bayreuth has won third place in the worldwide MOBI Grand Challenge. The competition premieres innovative applications of blockchain technology in the areas of transport and automotive mobility.

With a new concept that combines autonomous driving with a blockchain-controlled system of remuneration, the Bayreuth students were able to prevail over 21 other teams in the final round – including teams from prestigious US universities. Following the final round of the competition in Munich on 15 February 2019, the team under the guidance of Prof. Dr. Gilbert Fridgen were happy to accept their prize-money of 21,000 USD.

Matthias Babel, Jonas Brügmann and Nicolas Ruhland, students of Business Informatics at the University of Bayreuth, together developed an innovative and marketable concept of ‘platooning’. The term denotes a process by which two or more vehicles drive behind one another separated literally by only centimetres. The vehicles constantly exchange their sensor data, meaning that the steering wheel, accelerator and braking pedals of the following vehicles are automatically controlled with great precision.

By means of this exchange of data, all of the vehicles involved are connected to each other by a sort of invisible tow bar, and thereby can form a convoy. The vehicle at the front is controlled by an actual driver, while the passengers in the following vehicles experience the sensation of autonomous driving without having to cede full control to any non-human systems.

Together with this exchange of sensor data, the Bayreuth champions incorporated a system of remuneration utilizing IOTA — a derivative of Blockchain technology. The sensor data forms the basis of cashflows running in parallel, with which costs are paid virtually the moment they accrue. This new application of IOTA was developed by students in the BlockchainLab of the Fraunhofer Project Group Business & Information Systems Engineering, which works together closely with the University of Bayreuth.

“We all were very surprised, but at the same time proud, when we found out that we were among the finalists of the MOBI Grand Challenge”, said Jonas Brügmann. “It was so impressive the way Jonas, Matthias and Nicolas grew together as a team, and with what intensity they set about winning over the international jury”, Jannik Lockl adds, having supervised the students as member of the Bayreuth Blockchain Research Group. He is on the staff of Prof. Dr. Gilbert Fridgen, head of the BlockchainLab, who has a professorship for Information Systems Management & Sustainable IT Management at the University of Bayreuth.

To vividly demonstrate to the jury how platooning can be combined with a system of remuneration on the basis of a blockchain, the Bayreuth team actually built model cars to put the concept into practice. The prototype examples showed how a commercially viable form of platooning could become a reality in the near future.

“The vision of autonomous driving, which just a couple of years ago was dismissed as wishful thinking, is today coming ever closer to being implemented. And the innovative ideas of our successful student team have made a great contribution to this. Platooning represents an important step towards fully autonomous road traffic, and will quite possibly play an important role in modern, environmentally-friendly transport systems in the very near future”, project leader Fridgen believes.

The MOBI Grand Challenge, which took place in 2018/19 for the first time, is an international competition conceived jointly by the Mobility Open Blockchain Initiative (MOBI) and the Trusted IoT Alliance (TIoTA). MOBI is the world’s largest consortium working on the research and use of blockchain technology in the automobile sector. With its more than 30 participating enterprises, it comprises 70 percent of the world’s automobile market. Famous global players, like BMW, Bosch, GM and IBM for example, are partners of the MOBI Grand Challenge.