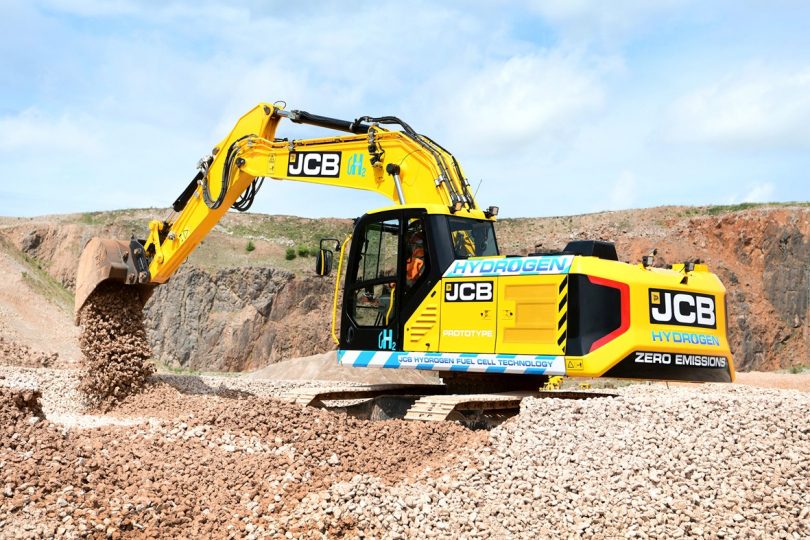 [JCB | theconstructionindex] – A prototype 20-tonne 220X excavator powered by a hydrogen fuel cell has been undergoing testing at JCB’s quarry proving grounds for more than 12 months.

JCB is in a race with rival manufacturers to bring hydrogen powered machinery to the market. Hyundai Construction Equipment revealed in March that it plans to start mass distribution of hydrogen fuel excavators in 2023. Others are also understood to have projects in development.

But JCB says with its 20-tonne 220X excavator it is the first construction equipment company in the world to unveil a working prototype of an excavator powered by hydrogen. Hydrogen reacts with oxygen in a fuel cell to create the energy needed to run electric motors. The only emission from the exhaust is water.

Hydrogen fuel cells are already powering some static plant on UK construction sites. AJC Easy Cabin’s Ecosmart Zero welfare cabins are powered primarily by solar power but, instead of having a traditional diesel generator in support, have a back-up hydrogen fuel cell to eliminate local carbon emissions completely. Water vapour is the only by-product.

Fuel cell systems are likely to cost more than diesel power to buy but they cost much less to run and are reckond to be likely to pay for themselves within a year or two, assuming the fuel becomes readily available.

JCB chairman Lord Bamford said: “The development of the first hydrogen fuelled excavator is very exciting as we strive towards a zero carbon world. In the coming months, JCB will continue to develop and refine this technology with advanced testing of our prototype machine and we will continue to be at the forefront of technologies designed to build a zero carbon future.”

Video about the prototype JCB 220X excavator on YouTube

Background
Lord Bamford’s son Jo Bamford spent 14 years at JCB before moving into the hydrogen sector, setting up Ryse Hydrogen and then buying Northern Ireland bus maker Wrightbus. He has won contracts to supply the world’s first hydrogen double-decker to cities such as London and Aberdeen.

Jo Bamford introduced Ryse to a fringe meeting of the Conservative Party Conference in October 2019. “We have a very simple vision: to totally decarbonise the entire UK bus fleet by 2030,” he said. “Whilst there have been great strides in developing electric vehicle technology, we risk overlooking hydrogen as a practical, here and now solution to tackling emissions and improving air quality… Our modelling shows that if you reach scale, fuel cell buses will be cheaper than battery electric buses and 12% cheaper than diesel buses by 2030. And once you’ve cracked buses, you can move on trucks, trains, ships and planes.” Last year JCB went into full production with its fully electric mini excavator, the 19C-1E, powered by lithium-ion batteries.