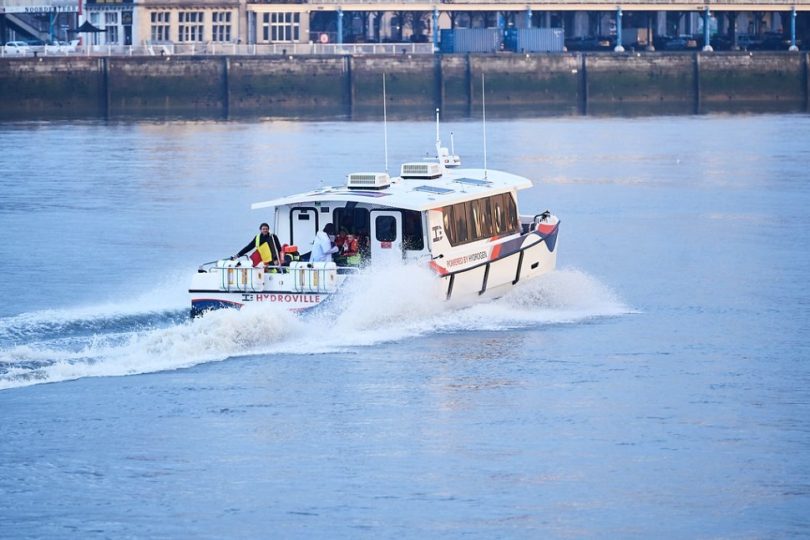 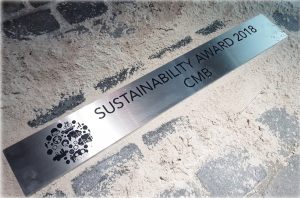 CMB has won the Port of Antwerp Sustainability Award. With this award the organisers of the contest wish to highlight sustainable initiatives undertaken by port users and stimulate sustainable economic practices. CMB received the award for the hydrogen powered passenger vessel, Hydroville.

The Hydroville – officially presented exactly one year ago – is the world’s first accredited passenger vessel powered by hydrogen in a diesel engine. The advantage of hydrogen is that no CO2, atmospheric particulate matter or sulphur oxides are released during combustion. The catamaran is first and foremost a pilot project to test hydrogen technology for applications in large seafaring ships. The shuttle will also commute daily between Kruibeke and Antwerp during peak times, to provide CMB employees with efficient, environmentally-friendly transport to and from the office.

The Compagnie Maritime Belge has close to a hundred ships navigating the globe, all supported by CMB Technologies, a branch within the group dedicated to developing new technologies and implementing existing ones. Ultimately, the goal is to make the entire CMB fleet greener, more efficient and more competitive. In light of this, it was decided in June 2016 to develop a small, fast, hydrogen-powered ship: the Hydroville.

Hydrogen as a fuel for the future

The Hydroville project is a showcase for the use of clean fuel, in this case hydrogen (H2), in the maritime sector. Hydrogen can be extracted from the environment (e.g. from water) relatively simply, and does not release any CO2, atmospheric particulate matter or sulphur oxides when it is combusted.

The company opted for combustion engines because batteries or fuel cells are less suitable for heavy transport (such as ships and aircraft). The batteries required for an application of this kind would be so huge that their cost and weight would make them economically unfeasible. The time it takes to charge that kind of battery would be problematic as well. Fuel cells offer more possibilities in that area, but the high cost makes them less suitable for large-scale commercial transport.

To build green ships or aircraft at present, one will need to focus on biofuel or hydrogen. The first experiment on the table in commercial (freight) shipping is to equip a CMB container ship with a hydrogen-powered auxiliary engine.

The name of the experimental vessel is made up of two elements that have a specific meaning both separately and together. ‘Hydro’ means water in Greek. ‘Ville’ refers to CMB’s rich history: all the company’s passenger ships used to have a name ending in ‘ville’ (Albertville, Leopoldville, Fabiolaville, Anversville, etc.). In fact, the shuttle is the group’s first passenger vessel since CMB discontinued its passenger lines.

The word Hydroville literally means “water city” or “hydrogen city”, and refers to the Hydroville’s home port of Antwerp. There is already considerable know-how about hydrogen present in and around Antwerp, and the Hydroville project aims to consolidate and further develop this expertise, turning Antwerp into a hydrogen knowledge centre.

The Hydroville is fitted with 16 comfortable seats that can be set up in three different configurations. Besides the commuter configuration, they can also be set up for meetings, with all the seats placed around a large central table. Last but not least, in the cinema configuration, all the seats face the flat-screen TV, for films or presentations. There is an outdoor passenger deck at the stern.

There is also a small galley and toilet provided for longer trips. To improve the level of comfort, sound insulation has been fitted and there are two air conditioning units. The ship also has onboard Wi-Fi and built-in USB chargers.

In the initial phase, the Hydroville will transport CMB employees between Kruibeke and Antwerp during the rush hour, to avoid the traffic jams. The ship will occasionally be used for meetings or dinners on board, or to organise a trip to the Port of Antwerp. It will also function as a base for demonstrating the use of hydrogen in shipping, and will be sent out to attend events all around Europe in this context. Furthermore, the ship can also be used for excursions to the wind farms off the Belgian coast in holiday periods, when there are fewer traffic jams.