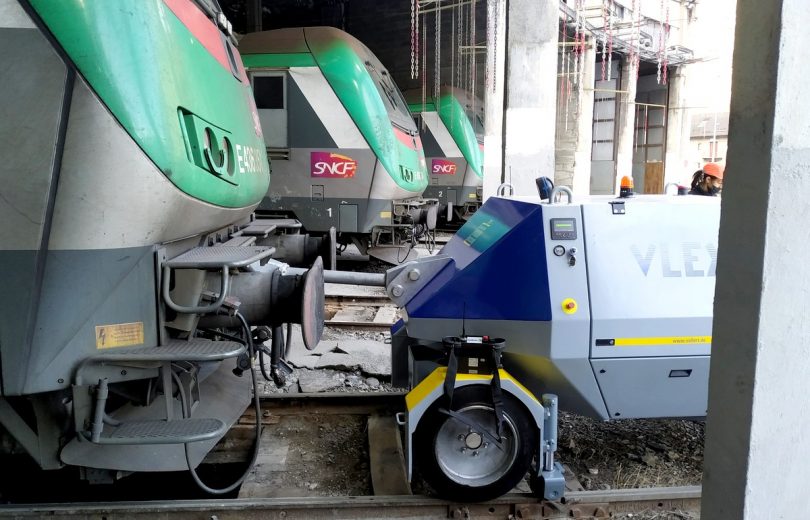 The compact VLEX 20 model at Fret SNCF in Modane . © Vollert

[Vollert] – Shunting expert Vollert deploys its VLEX robot vehicle for rail and road at Fret SNCF’s maintenance site in Modane. The compact roadrail robot moves locomotives weighing up to 120 tons effortlessly into their maintenance boxes. Vollert will also be focusing on these and other battery-powered, zero-emission shunting solutions at InnoTrans 2022.

From minor repairs to complete maintenance – Fret SNCF, the leading transport company in France for the rail transport of goods, regularly prepares locomotives in 14 maintenance boxes at the maintenance center in Modane. Vollert’s road-rail vehicle VLEX enables the positioning and shunting of the locomotives, which do not run by themselves, on the maintenance site.

Compact and powerful
“Particularly challenging in the French Alps are the harsh weather conditions,” knows Michael Spohn, Vollert’s project manager for sales. “However, the VLEX is ideally equipped for this. It can be used in snow, rain, ice or high minus temperatures.” The shunting robot also manages the change between different surfaces on the terrain without any effort: A swing axle guarantees safe continuous ground and rail contact of all four wheels even on uneven and unpaved floors. At the same time, the sophisticated vehicle geometry with articulated steering and four individually controlled wheel hub motors makes if extremely maneuverable and economical. 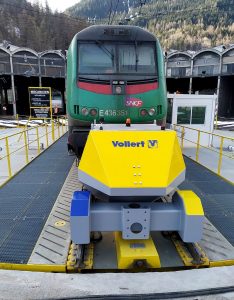 The compact VLEX 20 model at Fret SNCF in Modane . © Vollert

The compact VLEX 20 model at Fret SNCF in Modane has a tractive force of 20 kN or 300 tons to move locomotives weighing up to 120 tons without difficulty to the desired location. With the VLEX 40 model, Vollert is also doubling the application range of its compact solution for shunting operations up to 600 tons, and thus further increases flexibility in shunting freight cars or internal transport wagons. At Fret SNCF, the shunting vehicle is coupled to the trains by means of a standard coupler using the UIC hook. In addition, the VLEX can be equipped with all manual or automatic couplers, for example, also for shunting underground trains and tramways.

Emission-free and flexible to use
“With the VLEX, we offer an emission-free solution that is also spacesaving and more maneuverable than a conventional shunting solution,” reports Michael Spohn. In addition, while two employees were previously required to move the locomotives, the VLEX now enables more flexible shunting on the plant premises: “Controlling the shunting robot by remote control and thus shunting the locomotives only requires one employee,” explains Christophe Pottier, Managing Director of Sémame, Vollert’s French sales partner, who also instructed all factory staff in Modane in the operation of the vehicle on behalf of Vollert. “This allows the VLEX to be used for shunting tasks at shorter notice and as required, or to quickly clear the tracks for through-traffic by switching from the rail onto the terrain when needed.” The battery-powered VLEX itself is exceptionally easy to maintain. Thanks to its on-board charger, it can be powered either standing on the tracks or away from them via a 16 A socket. At night, the vehicle is stored in one of the maintenance boxes.

In addition to Fret SNCF, the Swiss manufacturer Stadler also uses the road-rail vehicle for the shunting of trains in the production and maintenance process. The manufacturer of railway rolling stock makes use of Vollert’s shunting solution both at its branch in Liverpool, England, and at Stadler’s new plant in St. Margarethen, Switzerland.

At InnoTrans 2022, Vollert will present the VLEX 40 model for the first time at a trade show. In addition, there will be a focus on further battery-powered and thus climate-friendly, exhaust- and noise-free shunting vehicles. InnoTrans, Hall 21/Stand 160, 20.-23. September 2022, Berlin.