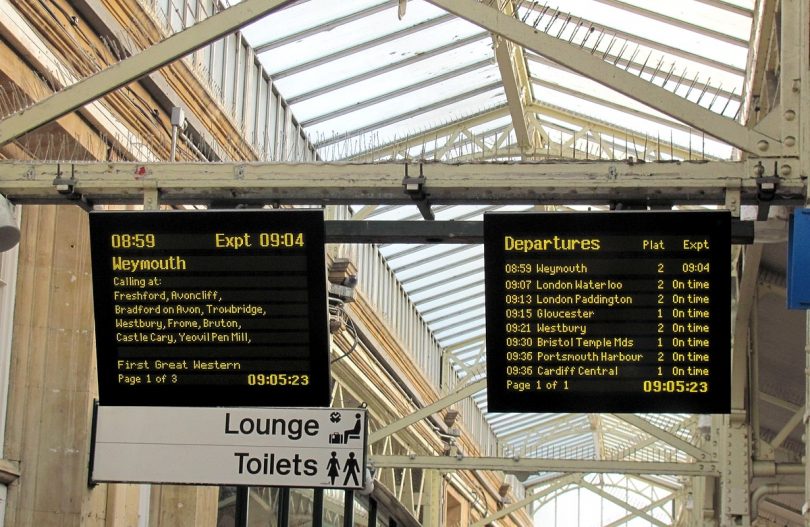 A train schedule at a station near London. Photo: Debra Levey Larson | University of Illinois Urbana-Champaign

[University of Illinois] – Over the past 20 years, the number of passengers traveling on British train networks has almost doubled to 1.7 billion annually. With numbers like that it’s clear how much people rely on rail service in Great Britain, and how many disgruntled patrons there would be when delays occur. A recent study from the University of Illinois Urbana-Champaign used real British Railway data and an artificial intelligence model to improve the ability to predict delays in railway networks.

“We wanted to explore this problem using our experience with graph neural networks,” said Huy Tran, an aerospace engineering faculty member at University of Illinois Urbana-Champaign (UIUC). “These are a specific class of artificial intelligence models that focus on data modeled as a graph, where a set of nodes are connected by edges.”

“This was a collaboration with Simon Hu, an expert on railway networks, from the Zhejiang University-University of Illinois Urbana-Champaign Institute,” Tran said. “We worked together to develop a new way to represent a rail network and apply it to real-world data to predict delays.”

They applied the Spatial-Temporal Graph Convolutional Network model to predict delays within a portion of the British rail network where Didcot Parkway and Long Paddington serve as gateway stations.

“Compared with other statistical models, this one outperforms them for forecasting delays up to 60 minutes in the future,” Tran said. He added that others have developed similar models for social networks, but he wanted to apply it to an engineering problem.

“One challenge was that this data only captures the full trip of a train from start to finish. It doesn’t tell us where it was delayed along the way,” he said. “The new formulation we developed was a way to approximate in which leg of the trip the delay occurred. From this research, we learned that using our formulation with this class of AI models can work well with real-world networks to predict behaviors.”

Tran said they are addressing some limitations, however: “A lot of times with AI models, we don’t really understand why the model says what it does. We just try to predict what the delay will be, but we don’t have any insight into why it was delayed, or where. So, one of the things we’re interested in is getting more explainability into these models, so we can better understand why it’s making the suggestion or predictions that it does. We’d also like to at some point, close the loop and say, given this information, here’s how you might want to react to that delay.”

The study, “Railway Delay Prediction with Spatial-Temporal Graph Convolutional Networks,” written by Jacob S.W. Heglund, Panukorn Taleongpong, Simon Hu, and Huy T. Tran was presented at the IEEE 2020 International Conference on Intelligent Transportation Systems. A video of the presentation is available on Youtube at www.youtube.com/watch?v=p5LO97n3llg.