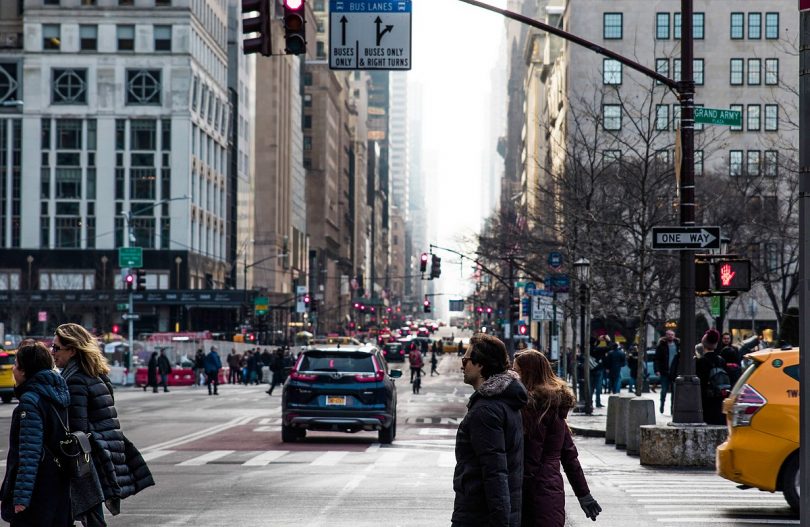 [UOC] – Research suggests urban complexity dampens our ability to pay attention and steer clear of unexpected events. According to the study, training artificial intelligence to detect patterns by analysing photos of a specific area will encourage the design of safer public spaces to curb traffic accidents.

Despite pandemic-driven restrictions on movement, there were over 12,000 accidents in Madrid in 2020, leading to 31 fatalities. In Barcelona, there were more than 5,700 collisions, causing 14 deaths. Pedestrian and vehicle safety is a priority, which is why a research project at the Universitat Oberta de Catalunya (UOC) is harnessing artificial intelligence (AI) to make decisions that will make cities safer. The researchers have looked into the correlation between the complexity of certain urban areas and the likelihood of an accident occurring there.

According to the researchers, the data they have gathered can be used to train neural networks to detect probable hazards in an area and work out patterns associated with this high risk potential. The researchers, headed by Cristina Bustos and Javier Borge, are working with algorithms that will aid traffic authorities in reducing the likelihood of accidents in urban environments.

The interdisciplinary study was carried out by two UOC research groups – Complex Systems @ IN3 (CoSIN3), from the Internet Interdisciplinary Institute (IN3), and the Scene Understanding and Artificial Intelligence Lab (SUNAI), from the Faculty of Computer Science, Multimedia and Telecommunications, in collaboration with Spain’s National Traffic Authority (DGT), the city councils of Madrid and Barcelona, academic affiliates from the Massachusetts Institute of Technology (MIT) and researcher Alejandro Arenas from the Department of Computer Engineering and Mathematics at Universitat Rovira i Virgili (URV).

Accidents and the urban scene, what is the connection?
According to the researchers, the visual layout of what they call the “urban scene” influences the likelihood of an accident occurring. Cristina Bustos, a member of CoSIN3 and first author of a scientific article recently published on the project, said: “Our findings show that there are certain patterns in the scene layout that may affect the accident rate.”

For the researcher, key factors such as the arrangement of street furniture, the location of parked cars, advertisements and façades increase driver distraction. “Our findings suggest that we’ve got more than just a hypothesis on our hands,” said Javier Borge, lead research of CoSIN3. “What seems clear is that the number of distinct elements in a scene correlates with the number of accidents that have taken place there.”

Understanding the reason behind this correlation is the crux of the matter. Borge said: “The AI pinpoints places that are potentially hazardous, but it doesn’t tell us why. That’s why we turn to certain interpretation techniques, such as those used in this study, which bring us closer to an answer. Although we need to pursue this research line further, there’s no doubt that traffic accidents happen for many reasons and a combination thereof. Our study shows that scene layout is a factor to bear in mind.”

According to Borge, he and his fellow researchers hypothesise that human cognitive limitations are affected by the complexity of the scene. He said: “If a scene is very complex, there is more strain on my cognitive system, possibly dampening my ability to steer clear of unexpected events.” This is where the outside help of artificial intelligence comes in, applying algorithms to identify complex urban patters.

Using algorithms to reduce the likelihood of accidents
Artificial intelligence has stepped up its possibilities, especially since the appearance of technologies such as neural networks and machine learning. The former is a computational model that has evolved from knowledge of the brain’s plasticity, while the latter is a branch of AI that allows machines to learn without being specifically programmed to do so. The technology employed by the UOC research group is based precisely on these concepts.

Cristina Bustos said: “We use deep learning [a type of machine learning based on a set of machine learning algorithms] applied to computer image processing.” According to the researcher, “the purpose of these algorithms is to identify patterns in photos or videos in order to perform a specific task, for example recognizing the objects that appear and where they are or identifying the general context of the image, or even more complex tasks, such as recognizing the emotion that an image or video evokes in a person”.

The researchers employ convolutional neural networks, so named because they apply an operation called “convolution” on the input image and throughout the network layers. “Applying this operation,” Bustos said, “the network learns to discern simple patterns in the top layers, such as lines, edges, textures, colours and corners, and becomes more complex the deeper it goes. In the end, the network is able to identify complex patters such as a person’s face or a car.”

This type of network needs to train to perform a task, repeating the processes over and over while the researchers indicate whether it has performed well or not. Cristina said: “We don’t train the network from scratch, rather we use one that has already been instructed for another task, such as recognizing people or animals, and we take advantage of this knowledge to teach it to recognize hazardous objects and patterns that may lead to accidents.”

AI, a city planner’s greatest ally
“One of the challenges of neural networks is that, given their deep, non-linear and complex nature, we don’t have control over what patterns they are learning,” said Bustos. “That’s why we have turned to other deep learning techniques, such as image segmentation and class activation mapping.” The former, she clarified, pinpoints objects in an image through their pixels, while the latter maps out the regions in the image that the network is to look at to obtain results.

Javier Borge pointed out that “artificial intelligence strikes us as a very powerful tool for finding out where problems might occur, but it’s not going to solve them on its own”. Thus, the team has developed a heuristic method for improving urban scenes which, according to Borge, “is worthless without a human behind it,” such as an urban planner, an architect or an engineer who is able to validate and implement changes based on the algorithm-driven data.

With artificial intelligence on their side, the researchers are looking at multiple hazardous urban patterns. Bustos said: “Right now we are analysing how the visual scene affects drivers’ stress”. Accordingly, the researchers believe that this type of technology can be of great use to bodies such as the DGT, with a view to designing safer cities for vehicles and pedestrians. To conclude, Borge said, “Our biggest hurdle is data availability: the analysis requires a rich collection of street view images and open, geolocalized data on accident rates with details of those involved, which are not currently easy to obtain”.