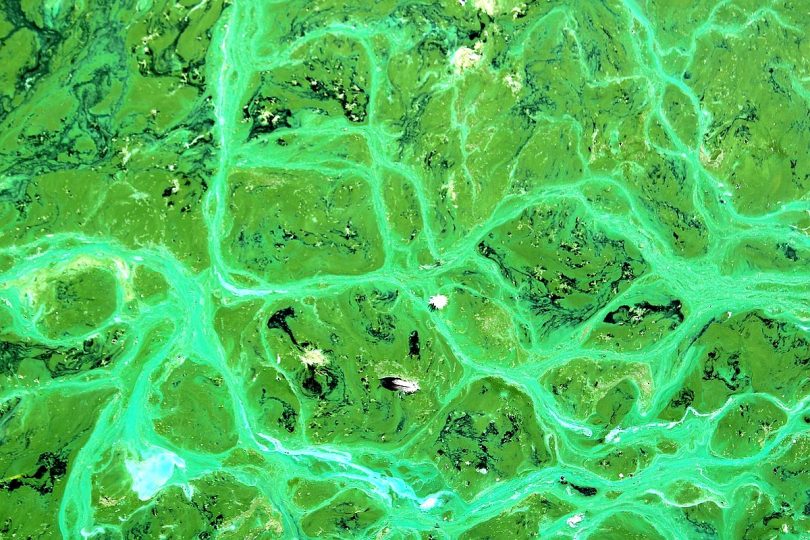 [University of Bonn] – Cyanobacteria – colloquially also called blue-green algae – can produce oil from water and carbon dioxide with the help of light. This is shown by a recent study by the University of Bonn. The result is unexpected: Until now, it was believed that this ability was reserved for plants. It is possible that blue-green algae will now also become interesting as suppliers of feed or fuel, especially since they do not require arable land. The results have now been published in the journal PNAS.

What do rapeseed, avocado and olive tree have in common? They are all used by humans as producers of oil or fat. However, the ability to produce oil from water and carbon dioxide with the help of light is something that is essentially common to all plants, from unicellular algae to the giant sequoia trees. “We have now shown for the first time that cyanobacteria can do the same,” explains biologist Prof. Dr. Peter Dörmann from the Institute of Molecular Physiology and Biotechnology of Plants (IMBIO) at the University of Bonn. “This was a complete surprise, not only to us.”

Until now, experts had assumed that cyanobacteria lack this property. After all, they are actually bacteria, even if their trivial name “blue-green algae” suggests otherwise. They therefore differ considerably from plants in many respects: Cyanobacteria are closer related to the intestinal bacterium E. coli than to an olive tree. “There are indeed ancient reports in the literature that cyanobacteria can contain oil,” says Dörmann. “But these have never been verified.”

The scientist has been working at IMBIO for many years on an enzyme that catalyzes one of the steps in oil synthesis in plants. The enzyme is active in the chloroplasts, the green-colored cell components that are responsible for photosynthesis. It is thanks to these that plants can produce energy-rich chemical compounds with the help of sunlight.

Many scientists suspect that chloroplasts originally come from cyanobacteria. This is because they, unlike all other groups of bacteria, also master the photosynthesis typical of plants, with the release of oxygen. According to this theory, more than a billion years ago, a primordial plant cell “swallowed” a cyanobacterium. The bacterium then lived on in the cell and supplied it with photosynthesis products. “If this endosymbiont hypothesis is correct, then the oil synthesis enzyme of the chloroplasts might originally come from cyanobacteria,” explains Dörmann. 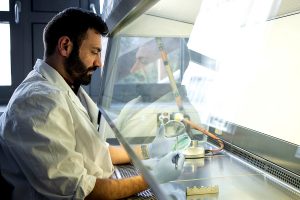 Mohammed Aizouq takes cells from a Petri dish containing the cyanobacterium Synechocystis for further analysis. The blue-green alga has an enzyme with which it can synthesize oil. Photo: Yannic Müller | Uni Bonn

Oil synthesis enzyme similar to that of plants
He pursued this possibility together with his doctoral student Mohammed Aizouq. The scientists searched the genomes of various cyanobacteria for a gene that is similar to the genetic make-up of the enzyme involved in plant oil synthesis. With success: They found a gene for a so-called acyltransferase in the blue-green algae; the plant enzyme also belongs to this group. Further tests showed that cyanobacteria do actually produce oil with this enzyme, even if only in small quantities.

The result is on the one hand interesting from an evolutionary-biological point of view: It shows that a certain part of the oil synthesis machinery in the chloroplasts of the plants probably originates from cyanobacteria. However, plants today mainly use other metabolic pathways to produce oil. Furthermore, the result may open up new possibilities for producing animal feed or biofuels. This is because, unlike oil plants such as rapeseed, cyanobacteria do not need arable land to grow – a container with culture medium and sufficient light and heat is enough for them.

This may make them suitable for deserts, for example, where they can be used to produce oils for car engines without competing with food crops. Especially since combustion would only release the carbon dioxide that the cyanobacteria had previously extracted from the air during oil production. The microorganisms would thus make a contribution to climate protection. In any case, the cyanobacteria living in the world’s oceans bind considerable quantities of the greenhouse gas. It is estimated that without their contribution, the concentration of carbon dioxide in the atmosphere would be twice as high.

“Similar experiments are already underway with green algae,” explains Dörmann. “However, these are more difficult to maintain; moreover, they cannot be easily biotechnologically optimized to achieve the highest possible oil production rate.” This could be different with cyanobacteria. The species studied at the University of Bonn produces only very small amounts of oil. “It is nevertheless quite possible that other species are considerably more productive,” says the biologist. Furthermore, blue-green algae can be genetically modified relatively easily, similar to other bacteria. “It is therefore certainly possible that the oil yield could be significantly increased again with biotechnological means.”