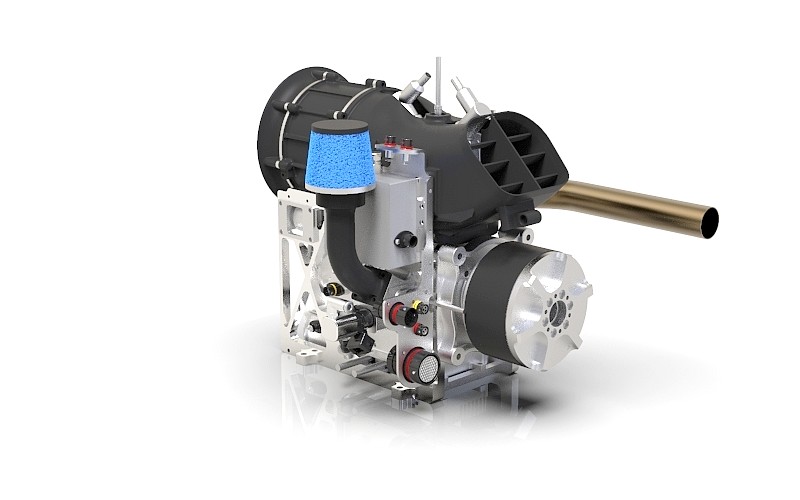 [Sky Power] – The SP-55 single-cylinder engine is one of the first engines by the German propulsion manufacturer Sky Power and comes in different versions. The SP-55 FI TS hybrid with integrated generator is designed to generate electricity in unmanned flight systems. The engine has twin spark plugs and is equipped with a fuel injection.

“The SP-55 FI TS hybrid is the first two-stroke engine built by our company that was developed to generate only electrical energy,” explains Karsten Schudt, managing partner of Sky Power GmbH. With this new engine, Sky Power wants to address users of solely electric propulsion technologies who are looking for an efficient generator solution not only for unmanned flight systems but also for other applications. “For UAVs, the benefits of such a generator solution are obvious. The combustion engine can extend the range or flight time as well as ensure the transport of heavy loads,” Schudt continues.

The SP-55 FI TS hybrid is equipped with a fuel injection system and a brushless DC motor for power generation. Furthermore, the lightweight starter generator control SGC 352, presented just recently, has been integrated. As well as the HKZ215 ignition system, which achieves considerably higher ignition performance. Thereby the overall performance of the engine increases and the exhaust emission levels are improved. An integrated cooling system for the engine and the generator was developed to cool the entire engine unit.

The engine itself sits in a sturdy aluminum frame, in which it has been installed lying on its side. The injection, control and temperature control as well as the air supply are located on the side of the engine. The generator is mounted on the rear output shaft. The rear output shaft and the position of the fuel injection on the side, make this engine one of the most compact 1-cylinder engines on the market. Above the engine and generator is the cooling system, which supplies fresh air and removes warm air.