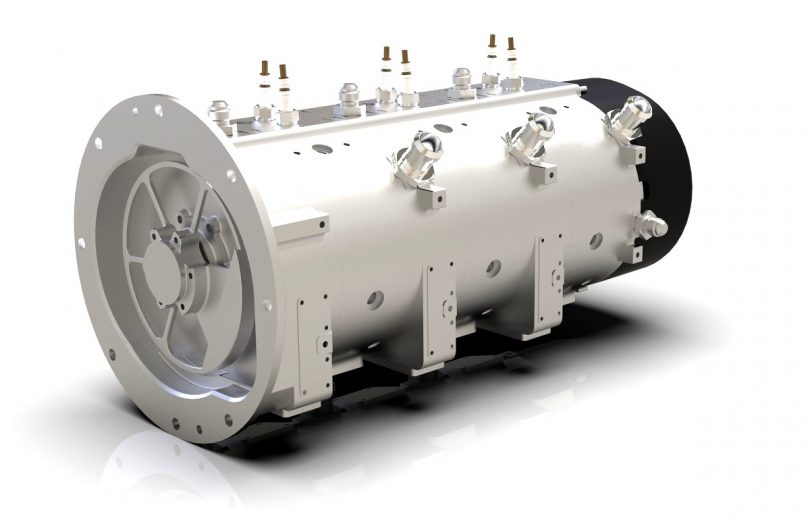 “As we do every year, we will again be able to present a whole range of product innovations at the Xponential,” explains Karsten Schudt, Managing Director of Sky Power International. The focus will be on the new SP-360 DRE and SP-540 TRE Wankel engines. The SP-360 DRE is a double-blade Wankel engine with up to 51 hp (38 KW) at 6000 RPM. The SP-540 TRE, on the other hand, is a tripple-blade Wankel engine (Picture above). This one produces 74 hp (55 KW) at 6’000 RPM.

As a propulsion system, Wankel engines ↗ are exceptionally lightweight and require a smaller installation space than comparable two-stroke engines. Minimal radial or torsional vibration makes this motor particularly interesting when high performance optics or sensors are used in UAVs. The ability to mount these motors vertically at 90 degrees increases flexibility and is suitable for helicopter applications. “We are pleased that we can now meet high performance requirements with the extended Wankel motor family,” Schudt continues.

In addition to the Wankel engines, however, Sky Power International will also be showcasing its extensive two-stroke engine portfolio. Here, the engines are offered in different configurations within a wide ccm range. This philosophy always includes carburetted and fuel-injected versions in an engine family. HF engines are also available. This means that customers can choose between three different configurations based on one engine core system. Furthermore, all engines can be equipped with a starter / starter generator. This allows the engine with the most important subsystems to be integrated into an aircraft in a space-saving manner.

The entire engine portfolio can thus be used for hybrid applications. The SP-55 FI TS generator application in particular has been developed for this application. “This is the first two-stroke engine from our company that has been developed purely for the generation of electrical energy,” says Schudt. With this engine, Sky Power International aims to appeal to users of purely electric propulsion technologies who are looking for an efficient generator solution not only for unmanned aerial systems, but also for other applications. “For UAVs, the benefit of such a generator solution is obvious. The combustion engine can be used to extend the range or flight time as well as to ensure a transport of heavy loads,” Schudt continues. 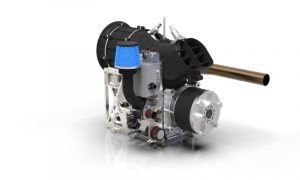 The SP-55 FI TS Generator application is equipped with an injection system and a brushless DC motor for power generation. To cool the entire engine unit, an integrated cooling system was developed for both the engine and the generator. The injection, the control and temperature control as well as the air supply are located on the side of the engine. The generator is mounted on the rear output shaft. The rear output shaft and the position of the fuel injection on the side make this engine one of the most compact 1-cylinder engines on the market.