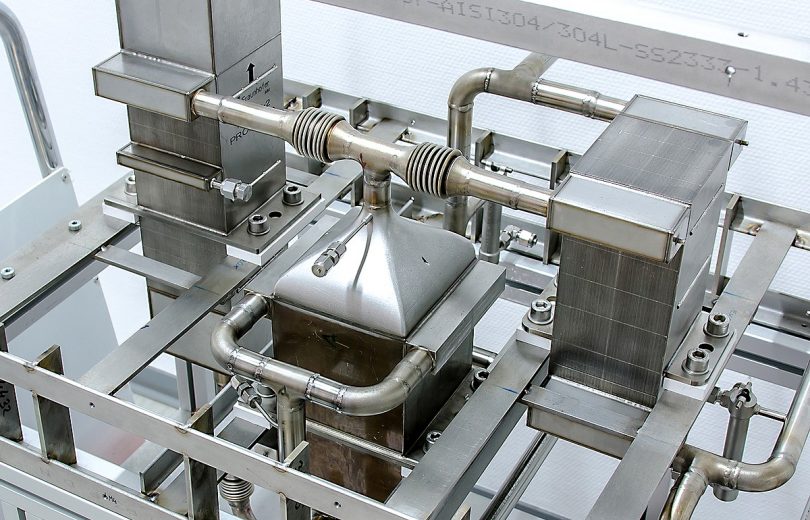 [Fraunhofer IMM] – Methanol reformers convert easy-to-transport methanol into hydrogen. But conventional reformers still come with a number of drawbacks – catalyst attrition, to name but one example. An innovative optimized methanol reformer for mobile applications from the Fraunhofer Institute for Microengineering and Microsystems IMM is able to overcome these challenges.

Hydrogen is the beacon of hope for the energy transition, as it is set to sustainably shape both mobility and industrial processes. But at present, there is still limited availability, as transporting hydrogen is a complex process. Converting hydrogen into methanol can provide a solution here, as not only is methanol much easier to transport than hydrogen, it can also be stored almost unlimited at ambient pressure.

This paves the ground for the production of green hydrogen in sunny regions and its conversion into methanol and its simplified transport, for example. The carbon dioxide required to produce methanol could either be extracted from the atmosphere or obtained from industrial processes, such as cement production. What’s more, methanol has a very high energy density – producing around 4.8 kilowatt-hours of energy per liter – a figure that is considerably higher than that of compressed hydrogen. In addition, the International Energy Agency forecasts highly attractive costs of around six cents per kilowatt-hour for methanol. 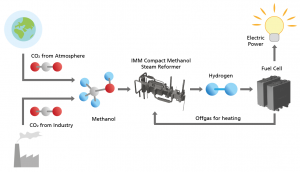 Utilizing methanol as a hydrogen carrier and converting the methanol back into hydrogen.
Fraunhofer IMM

To utilize the energy stored in the methanol, a methanol reformer and steam are used to convert it back into hydrogen and carbon dioxide – at the place where the hydrogen is needed, such as the car. The overall carbon footprint is therefore neutral. However, there are still a number of drawbacks with conventional reformers. Take, for example, the catalysts that are needed for the reactions. They are comprised of copper-zinc-oxide powder that is added to the reactor in the form of extruded pellets. However, the inevitable movements in mobile applications lead to catalyst attrition that contaminates the fuel cell. The catalyst material is also not fully utilized and the reaction rate is low owing to relatively low reaction temperatures. Challenging is also the heat management: the reactor requires heat supply to drive the steam reforming reaction – but this is where a lot of efficiency is lost. Heat from the fuel cell off-gas also cannot be utilized efficiently.

Efficient catalysts, efficient heat management
In the scope of a multitude of publicly funded and industry projects, researchers at Fraunhofer IMM are developing methanol reformers that can overcome these challenges. For instance, the reformers they are developing for mobile applications offer various advantages. Among them is a much lower space demand – it amounts to one sixth, around 17 percent, of the space that a conventional reformer of comparable performance class would require – which is extremely important for mobile applications. The researchers have also optimized the catalyst technology.

“We are opting for catalyst coatings containing precious metals similar to those used in automotive catalytic converters, because there is no attrition with these coatings,” says Dr. Gunther Kolb, Deputy Institute Director and Division Director at Fraunhofer IMM. “Less catalyst material is required as a result. Because our catalyst materials also have a higher activity, the amount of catalyst required is reduced even further, and consequently the costs.” While conventional catalysts increasingly produce by-products such as carbon monoxide when operated at partial load, this is not the case with the catalyst from Fraunhofer IMM.

The research team has also optimized the heat management, and in doing so has optimized the reformer’s energy efficiency as well. The team coats plate heat exchangers with the catalyst material and combines them into stacks of up to 200 plates. When the gas flows over the plates, it comes into contact with the catalyst and is also heated highly efficiently in the small channels. “By utilizing the waste heat, we achieve excellent heat integration and high system efficiency,” explains Kolb. The technologies for mass-production of the reactors is on the focus of the researchers: The reactors can be produced by similar as established for high-pressure resistant automotive heat exchangers.

At present, the researchers are working on a prototype with 35 kilowatts of power which is foreseen to be completed by the middle of 2022. “This is a long-term project; various prototypes are being integrated into land vehicles so that we can test them,” states Kolb. For maritime applications, the researchers are developing a reformer providing 100 kilowatts of power, for example. In the long term, it is even conceivable that the reformers that are currently being produced from steel will be made from lightweight materials such as titanium – which will be crucial when introducing the technology into automotive applications, etc. as a strategy for the reduction of weight and energy consumption.