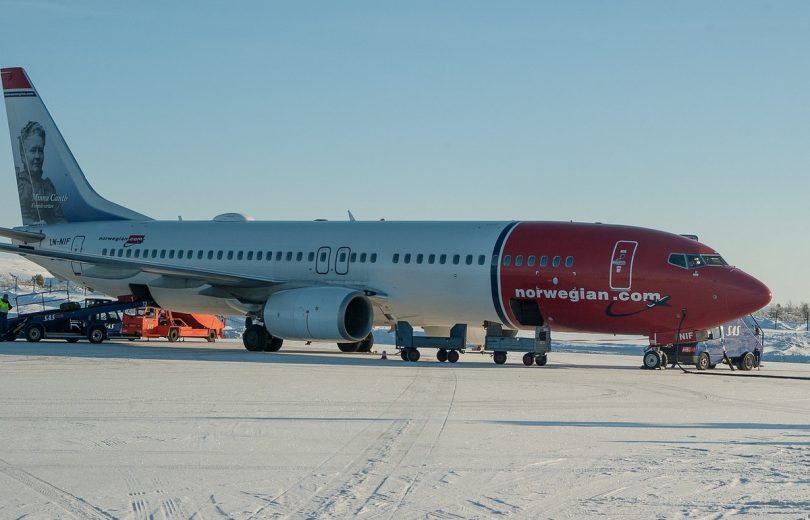 [NTNU] – Norwegian greenhouse gas emissions from air traffic are more than twice as high as the worldwide average.

“Reducing emissions related to aviation in Norway is a priority in view of our net zero emissions goal,” says Helene Muri, a climate researcher at the Norwegian University of Science and Technology (NTNU). Norway’s geography with its fjords and mountains is often cited as the reason why Norwegians fly more than people in other countries. But the explanation isn’t that simple, says Muri. Her research group now has conducted a detailed study of emissions from Norwegian air traffic.

Northerners have the same right to travel
“Norway is an interesting case because geographically it is long and narrow, with rugged terrain. We have beautiful natural features with fjords and mountains, but that also makes it difficult to get around,” Muri says. “People in northern Norway have the same right to travel opportunities as people in other parts of the country, although their transportation choices are far slimmer. But in order to successfully cut emissions, we have to understand where the emissions come from and how they occur.”

The routes along the districts’ short-haul network are not where the high emissions levels are found. “The main problem is not in the short-haul flights, but in the routes between the big cities. The greatest emissions are found on routes like Oslo – Trondheim and Oslo – Bergen,” says Muri. “Taken together, these two routes account for about 20 per cent of emissions on domestic routes,” she said.

Detailed emissions data for Norwegian aviation
Muri and her colleagues have mapped the emissions from all air traffic in Norway throughout 2019. They used a method called ADS-B data (Automatic Dependent Surveillance-Broadcast data). Using information that is sent out automatically and continuously, such as the aircraft’s position, altitude and speed, they have produced a high-resolution data set for fuel consumption and greenhouse gas emissions for all the flight routes in Norway. The dataset also includes flights into and out of the country. “Our findings show that emissions from air traffic are having a significant impact on Norwegian greenhouse gas emissions,” she says.

“On average, each Norwegian contributes about 580 kg of CO2 through domestic and international flights. This amounts to 7.3 per cent of Norwegians’ CO2 footprint and is more than twice as high as the world average of 2.8 per cent,” says Muri.

Electrification and alternative fuels
A total of 1.6 megatonnes (1 Mt = 1 million tonnes) of fuel was used on flights in Norway in 2019, of which 0.3 Mt was used on domestic flight routes. All told, this amounted to CO2 emissions of 1.0 Mt on domestic routes and 2.07 Mt on international routes.

Muri believes there is room to reduce emissions on domestic journeys. “We have to look at which solutions fit where. One possibility might be to use trains on the routes that currently generate the highest emissions. Electrification of the routes could be another option,” she said. “The shorter routes have higher emissions relative to their distance, since more fuel is required for take-off and landing.”

Baseline research for politicians
Muri believes their study findings will be useful for politicians when decisions have to be made. “We show what the emissions are per passenger on each route, and which routes account for the most emissions. The study provides insight into which measures can be effective where, and what kind of investments in transport infrastructure could have a positive climate effect,” she says. “For example, the Oslo – Bergen and Oslo – Trondheim routes could be relieved by trains. For short flight routes with high emissions, it might be interesting to look at low-carbon alternatives over time, like electrification or hydrogen.”

Alternative fuels will help reduce emissions from air traffic.
“In addition to solutions like electric aircraft and hydrogen, sustainably produced biofuel and synthetic fuel will be able to contribute on routes where electric aircraft aren’t suitable,” she says.

Emissions twice as high as in Sweden
Jan Klenner is a PhD student and first author of the article “High-resolution modeling of aviation emissions in Norway,” co-authored with Helene Muri and Anders H. Strømman. Klenner says aviation has lagged behind in reducing greenhouse gas emissions, which is partly due to the fact that it is difficult for nation states to control and regulate international flights. “It’s easier to regulate and influence domestic flights. In this study we’ve set up a new model with quite a detailed data set for Norwegian aviation. The model calculates different types of air traffic emissions based on travel route, aircraft type, engine type and atmospheric conditions,” says Klenner. “We’ll continue to work with this model to look at global emissions and alternative fuel types.”

Klenner is from Germany and finds it interesting to see how big a carbon footprint is Norwegians have compared to other countries. Figures from the International Council on Clean Transportation (ICCT) show that the average Norwegian emits roughly twice as much CO2 from flying as do residents of Sweden, France and Germany.

Climate affected by more than just CO2 emissions
According to the UN climate panel, the transport sector accounted for around 15 per cent of the total emissions of man-made greenhouse gases in 2018. Aviation accounted for 2.4 per cent. But planes emit pollutants high up in the air, which leads to different types of impact than ground-level emissions. Emissions of substances other than CO2, such as NOx and water vapour, account for about 60 per cent of climate pollution from air traffic. This means that the climate impact from air traffic is twice as high as the proportion of CO2 emissions indicates.

The contrails from high-altitude emissions can contribute to the formation of ice clouds, or cirrus clouds, which have a warming effect on the climate. In 2019, Norwegian aviation accounted for emissions of 4.5 Mt CO2, 26.2 kt NOx, 3.26 kt HC (hydrocarbons), 1.8 kt CO (carbon monoxide) and 1.9 kt SO2 (sulphur dioxide).

The research is funded by FME NTRANS – the Norwegian Centre for Energy Transition Strategies at NTNU.