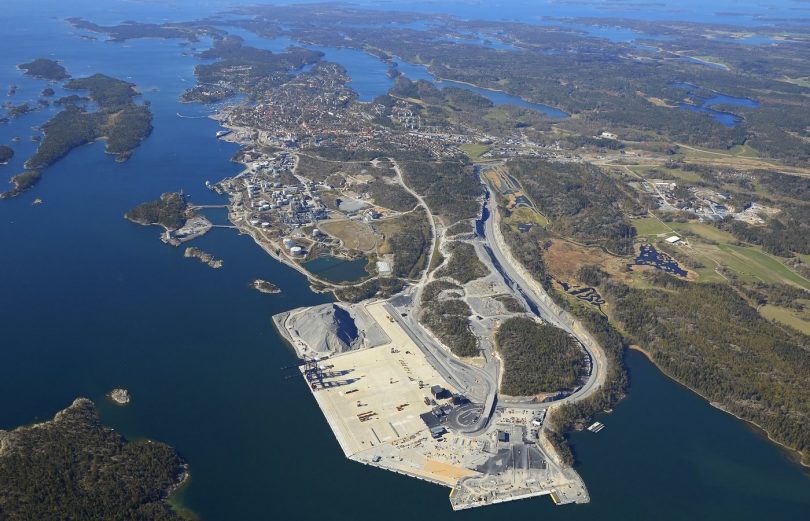 [Ports of Stockholm] – On 12 Jun 2020 the last container ship has left the “old” Frihamnen port. The unloading of the final container vessel at Frihamnen port in Stockholm was an end-of-an-era moment. Now traffic will be redirected to the new freight port, Stockholm Norvik Port, which by its strategic location contributes to sustainable transport direct to the growing Stockholm region.

May 27th will be remembered in the history books as the day the very first container ship arrived at Sweden’s newest freight port, Stockholm Norvik Port. As well as half of Sweden’s consumption happening in the Stockholm region, nine goods in ten arrive in Sweden by sea. The opening of Stockholm Norvik Port increases the opportunities to transport goods by sea as close to their final destination as possible. The port provides modern and efficient transport solutions through its proximity to the major shipping fairways, a natural depth of 16.5 metres, and good land infrastructure connections, including a newly built railway line. 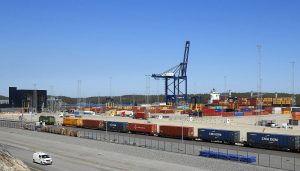 On Tuesday 9th June the first Green Cargo train arrived at Stockholm Norvik Port on the newly built industrial branch line. The first scheduled freight train has rolled into the new freight port along the new industrial branch line. Ports of Stockholm constructed the railway line to provide greater sustainable transport possibilities and to increase the range of transport alternatives to and from the port.

Ports of Stockholm has built just over four kilometres of industrial branch line to couple Stockholm Norvik Port to the Swedish railway network; an investment of SEK 800 million (EUR 75.96 million).

“It’s fantastic that the first train has now rolled into Stockholm Norvik Port. The industrial branch line links Stockholm Norvik Port to the entire Swedish rail network and is an important prerequisite for sustainable transport, as well as being able to offer good service to our customers,” sayd Johan Wallén, Marketing and Sales Manager at Ports of Stockholm.

Ports of Stockholm owns, and is responsible for, the operation of the branch line.

“The first train transported containers on the Green Cargo rail network from Stockholm Norvik Port. “This is the culmination of long-term planning in a rewarding and good collaboration between partners. Stockholm Norvik Port is a modern port with an infrastructure to meet market demands for increased frequency and capacity on the rail network. It is primarily businesses and customers in the Stockholm region, and central Sweden that will have an increased need for robust and reliable logistics solutions over the coming years. We are very happy to be able to provide this service,” says Robert Vintander, Branch Sales Manager, Green Cargo.

The new port has opened in uncertain times. The current situation highlights the importance of always having a functional supply of goods and the necessity of maintaining global and national transport links.

Stockholm Norvik Port opened in May 2020 and consists of two parts. One part is the container terminal that replaces the Container Terminal at the Frihamnen Port. This will be run by Hutchison Ports, one of the world’s largest container terminal operators, with 52 ports in 27 countries. The other part of the port is a RoRo terminal for rolling goods that will be run by Ports of Stockholm and will open during the autumn.