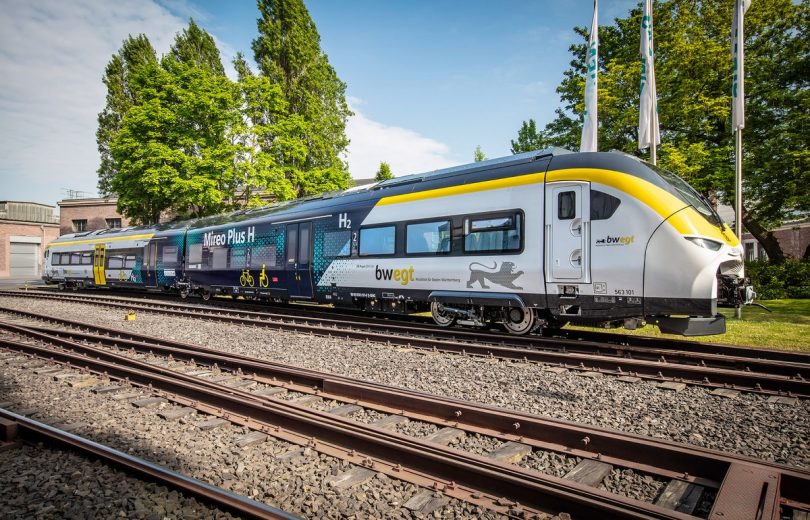 Rollout Mireo Plus H in Krefeld, May 2022
© Siemens Mobility

Deutsche Bahn (DB) and Siemens Mobility are continuing to drive the climate-friendly transportation transition in rail. The two partners premiered elements of their innovative complete system at the Siemens plant in Krefeld: The newly developed Mireo Plus H, the next-generation hydrogen-powered train, and a newly designed mobile hydrogen storage trailer. The train and its new infrastructure are intended to replace diesel multiple-unit trains in commuter and regional transport and reduce rail-related CO2 emissions to zero.

“In its coalition agreement, the federal government agreed to electrify 75% of the country’s rail network by 2030,” said Michael Theurer, Parliamentary State Secretary in the BMDV. “Here, alternative drives can help reduce emissions from diesel rail transport. This way, we’ll be able to operate virtually climate-neutral on rail routes where full electrification is not possible. The H2goesRail project will not only test the use of hydrogen for rail, but substantially advance the technology.”

“Only with a strong rail system and alternative types of drives will we be able to make a significant contribution to the fight against climate change. The Mireo Plus H enables climate-friendly and emission-free passenger transport,” commented Michael Peter, CEO of Siemens Mobility. “With the Mireo Plus H, we’ve developed the next generation of hydrogen-powered trains that offers a particularly long operating range and faster acceleration. Each delivered train can save up to 45,000 tons of CO2 over its service life of 30 years compared to corresponding travel with cars.”

“For Deutsche Bahn, hydrogen trains are an important component on our way to achieving climate neutrality,” said Dr. Daniela Gerd tom Markotten, Member of the Management Board for Digitalization and Technology at Deutsche Bahn. “With our development of the mobile hydrogen filling station and the related maintenance infrastructure, we are showing that we not only can do mobility, but technology as well. And exactly that is what is needed for providing the climate-friendly transport of tomorrow. Together with Siemens and the newly developed hydrogen train, we are creating an overall system which will take us another step towards phasing out diesel and enable the greening of the fleet.”

As a two-car train, the Mireo Plus H for the H2goesRail project has an operating range of up to 800 kilometers, is as powerful as its electric multiple-unit counterpart, has 1.7 MW of traction power providing up to 1.1 m/s2 acceleration, and a top speed of 160 kilometers per hour. A three-car version has a range of up to 1,000 kilometers.

One key element needed to make hydrogen technology competitive with diesel fuel in daily operation is a fast refueling process. To provide this, DB has developed a new method that, for the first time, enables a hydrogen train to be refueled as fast as a diesel-powered train. This is an especially important factor considering the closely timed scheduling of DB’s regional passenger service. The fast refueling of hydrogen trains will make the technology competitive in daily operations.

Hydrogen trains have a particularly climate-friendly drive technology, since it operates emission-free with green hydrogen and emits only water vapor. In the H2goesRail project, for example, the hydrogen train will save around 330 tons of CO2 in one year on the Tübingen-Pforzheim route, compared to a diesel-powered train. In general, the Mireo Plus H can save 520 tons a year depending on the route profile (calculated on mileage of 200,000 kilometers).

The hydrogen will be produced in Tübingen by DB using green electricity taken directly from the overhead power line. To service the train, the DB maintenance depot in Ulm will be equipped accordingly.

The Mireo Plus H will start testing in Baden-Württemberg in 2023. During its planned passenger service in 2024, the hydrogen train for the H2goesRail project with Deutsche Bahn will provide regular passenger service between Tübingen, Horb and Pforzheim and replace a diesel train.

Siemens Mobility and Deutsche Bahn will also be showcasing the H2goesRail project and the Mireo Plus H at the InnoTrans 2022, the world’s largest trade fair for railway technology, being held in Berlin.

The joint funding project is officially called “H2goesRail”. The Federal Ministry for Digital and Transport (BMDV) is funding the project with over €13 million through the National Innovation Program Hydrogen and Fuel Cell Technology (NIP 2). NIP 2 is coordinated by NOW (National Organization for Hydrogen and Fuel Cell Technology) GmbH and is being implemented by project lead Jülich.

Hydrogen propulsion
In hydrogen drive systems using fuel cell technology, the reaction of hydrogen and oxygen produces electricity and the “waste product” water. These trains can be used by DB as a way to become climate-neutral by replacing its diesel-powered trains with alternative drive systems. To ensure the solution is truly ecofriendly, green electricity is used to produce the environmentally friendly green hydrogen. DB Energy is responsible for supplying the hydrogen.

Mireo Plus H
Siemens has developed a two-car commuter train with a state-of-the-art hydrogen drive system. The system consists of a fuel cell and a lithium-ion battery. The Mireo Plus H will be as powerful as a conventional electric multiple-unit train and have an operating range of up to 800 kilometers, depending on operating conditions such as the season or the route. A three-car version will have a range of 1,000 kilometers. Among its distinguishing features are the train’s low lifecycle costs, due to low maintenance and repair costs, and a top speed of 160 kilometers per hour.

Filling station
DB has developed, tested and optimized the necessary hydrogen infrastructure. The hydrogen is produced by electrolysis at the DB maintenance depot in Tübingen using green electricity directly from the overhead power line. In the electrolyzer, water is split into hydrogen and oxygen using electricity. After being compressed, the hydrogen is stored in a mobile storage unit. Prior to the refueling procedure, the green fuel is processed and cooled. The mobile system will make it possible to conduct further test projects on non-electrified rail routes.

Rapid refueling
The train is refueled with hydrogen in an innovative procedure that, for the first time, takes no longer than tanking a diesel train. This is an especially important factor considering that DB’s commuter and regional trains operate on closely timed schedules. With this fast refueling process, hydrogen technology will be competitive with the diesel fuel currently in use.

Maintenance
The DB maintenance depot in Ulm will be converted to handle the servicing of the hydrogen trains. Extensively trained DB Region staff, supported by Siemens Mobility employees, will service and maintain the trains.

Passenger operations
After completing a test phase, the train will enter passenger service between Tübingen, Horb and Pforzheim in 2024. Approximately 120,000 kilometers of scheduled rail service are planned. The route is particularly suitable for the tests, with typical regional service frequency and topography. By replacing a diesel-powered train used on this route, the Mireo Plus H from Siemens Mobility will save around 330 tons of CO2 yearly. The drivers will be specially trained on the train and operate it in passenger service.

The “H2goesRail” project is being funded as part of the National Innovation Program for Hydrogen and Fuel Cell Technology (NOW GmbH) with EUR 13.74 million by the Federal Ministry for Digital and Transport (BMDV). The funding guideline is coordinated by NOW GmbH and implemented by project lead Jülich.