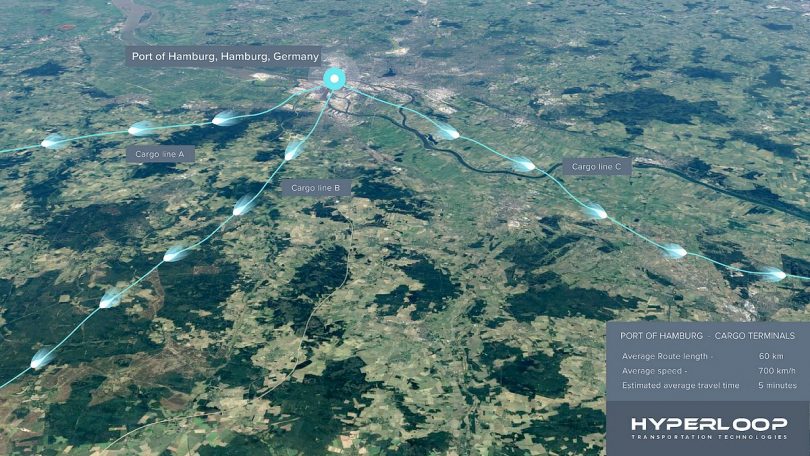 Hyperloop Transportation Technologies announced the creation of a joint venture company with Hamburger Hafen und Logistik Aktiengesellschaft (HHLA)—the leading container terminal operator in the Port of Hamburg. The company will focus on integrating the latest container movement innovations with Hyperloop technology into the largest rail port in Europe. Additionally, the new company will bring this new technology to ports, shipping, and logistics companies around the world.

The joint venture will develop and bring to market a Hyperloop transport system for seaport and inland shipping container operations. The project will begin with an initial study on connecting a cargo-based Hyperloop system from an HHLA container terminal to container yards located further inland, thereby expanding the port’s capacity, while reducing congestion within the port and city area, and lowering the carbon footprint of the port. Initially, the construction of a transfer station for testing purposes at a HHLA terminal in Hamburg is planned, including an initial 100 meter cargo route along with a special freight capsule and loading dock.

For many decades, HHLA has been leading the way in port innovations. In the late 1990s, the company was first to introduce GPS and automated port operations. In 2001, it was one of the first terminal operators to incorporate self-driving vehicles into daily operation, a groundbreaking innovation for other ports around the world. With this new company, HHLA continues a tradition of port innovation to service the millions shipping containers that come through annually.

“With the Hyperloop transport system, HHLA is pursuing the goal of developing an additional component of efficient logistic mobility solutions in Germany,” said Angela Titzrath, Chairwoman of HHLA’s Executive Board. “As a gateway to the future, we want to employ innovative approaches to make a contribution towards relieving the strain on the transport infrastructure in and around the Port of Hamburg and to use the capacities of our terminal facilities in an even more efficient way.”

“HHLA has a long history of innovation. Years before we were talking about self driving vehicles, containers moved autonomously in Hamburg,” said Dirk Ahlborn, CEO and co-founder of Hyperloop Transportation Technologies. “Together, we will develop a complete system, that not only concentrates on speed and efficiency, but also takes into account the issues ports face in daily operation.”

“Together with HHLA, this joint venture will be able to develop a commercial product that fills a missing need in the port industry,” said Bibop Gresta, chairman and co-founder of HyperloopTT. “We have one of the best possible partners to bring this to market globally.”