[Haropa Port] – In Le Havre, Brittany Ferries is launching a new freight service between Normandy and the town of Rosslare in Ireland. Underpinned by the dynamic generated by reorganisation of trade between Ireland and the European continent, this Haropa Port service provides one weekly return trip and began on 12 November.

The “Cotentin” can carry 120 driver-accompanied freight units on each trip between Le Havre and Rosslare. The creation of this new service between Le Havre and Rosslare is the practical outcome of the efforts made by Haropa Port and Brittany Ferries in the wake of Brexit, working hand-in-hand with a range of Irish economic and institutional actors. The new service provides an additional solution for connecting Ireland with the EU Single Market via France — one long awaited by players in the logistics sector in France and Ireland.

Haropa Port and Le Havre city authority are totally supportive of the consolidation of these new trade flows that will benefit from the logistics capacity offered by Le Havre’s industrial/port complex and industrial synergies between Ireland and Normandy, especially where fresh produce and medical products are concerned.

“Haropa Port is pleased to have contributed to the launch of this new service operated by Brittany Ferries, a long-standing partner for freight activities in Le Havre”, declared Stéphane Raison, CEO of Haropa Port. “As the leading French port, we wish to play our role to the full and we are all the more delighted to see this new service providing a fast maritime connection between the Paris consumer area and Ireland.”

“The establishment of this link between Le Havre and Rosslare is an important milestone for Brittany Ferries, Le Havre and its port,” added Jean-Marc Roué, chair of the Brittany Ferries supervisory board. “It had been feeling the lack of a freight line to Ireland until now because Brexit is opening up new opportunities every day, with a trebling in the number of vehicles carried by sea from Ireland in the space of less than a year! It reinforces our service offering from Cherbourg and our project for a multimodal rail highway soon to be connecting Spain and Normandy. For our line, being a part of this dynamic is clearly a necessity and we are proud to stand alongside Haropa Port and the chair of its management board Stéphane Raison! We needed to be positioned on all services that offer genuine potential for growth as part of our return to competitiveness. Establishing this link to Le Havre alongside Édouard Philippe eight years after the creation of our very first passenger service, is also a source of great pleasure for me.”

“Cross-channel services have suffered because of Brexit. The creation of this new direct link with Ireland is excellent news and a marvellous opportunity for the development and competitiveness of the port of Le Havre. It consolidates the position of Le Havre as one of the Europe’s main ports”, commented Édouard Philippe, Mayor of Le Havre and chair of the Le Havre Seine city and district authority.

Thomas Byrne, Minister of State for European Affairs of the Republic of Ireland added: “I wish to salute here the senior management of Brittany Ferries and Haropa Port for the clear-sightedness they have shown in grasping the strategic value and importance of this service. The fact that this direct link is now operational is a tribute to the perseverance and vision of its stakeholders. The full bookings announced for the maiden voyage are an excellent start. Confronted with the dual challenge posed by Brexit and the pandemic, these routes, which the media call ‘Brexit Busters’, have turned out to be crucial in maintaining the frequency of flows with the Single Market and the European continent as a whole.” 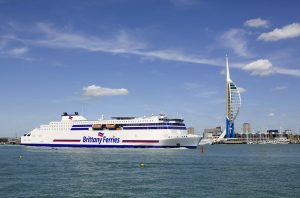 Brittany Ferries fleet renewal
Following the delivery of the “Galicia” in 2021, Brittany Ferries is continuing to renew its fleet with four other vessels. The “Salamanca” and the “Santońa”, both running on Liquefied Natural Gas, will enter service in 2022 and 2023. In 2024 and 2025, two hybrid-LNG ferries will be added to the fleet.

Since 1 June 2021, the ports of Le Havre, Rouen and Paris form the “major Seine Axis river and sea port authority”. As the fifth largest north-European port, Haropa Port has connections to every continent based on an international maritime offering in the very first rank (calling at nearly 650 ports). It serves an extensive hinterland centred on the Seine Valley and the Paris region, together constituting France’s biggest consumer catchment area.