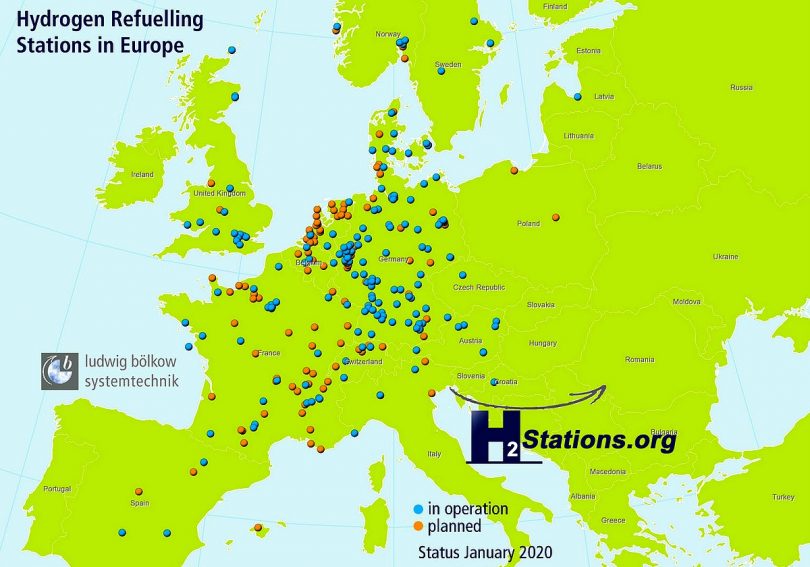 [LBST] – In 2019, 83 hydrogen refuelling stations went into operation worldwide. 36 new hydrogen stations were opened in Europe, 38 in Asia, 8 in North America, and another one in the Arabian region. Germany expanded its network by 22 hydrogen stations, Korea by 18, and Japan by 11. This is the result of the 12th annual assessment of H2stations.org, an information service of Ludwig-Bölkow-Systemtechnik (LBST).

At the end of 2019, 432 hydrogen refuelling stations were in operation worldwide, 330 of which were open to the public for vehicle refuelling like at conventional stations. The number of public hydrogen stations has more than quadrupled in the past five years. On top of that, 226 additional refuelling stations are in the planning stage at dedicated locations.

Europe had 177 hydrogen stations at the end of the year, 87 of which are in Germany. France is second in Europe with 26 operating stations and 34 planned hydrogen stations with further dynamic expansion expected. However, while the rest of Europe focuses on publicly accessible car refuelling stations, most of the French station aim at refuelling of buses and delivery vehicle fleets. A significantly increasing number is also projected in the Netherlands, where 21 new hydrogen refuelling stations are being planned. Switzerland intends to add 6 stations to the 4 already operating

There are 178 hydrogen stations in Asia, 114 of them in Japan, and 33 in Korea. The identified 27 Chinese hydrogen stations are used almost exclusively for the refuelling of buses or trucks fleets. The most ambitious near-term growth is anticipated in Korea, where about 40 planned hydrogen stations for cars and buses are planned.

The majority of the 74 hydrogen stations in North America continues to be located in California with 48 operating stations. Four new refuelling stations were added in 2019, and 21 more are being erected.

With newly opened hydrogen stations in Malaysia and Saudi Arabia, there are now two more countries with hydrogen refuelling infrastructure.

Interactive location maps and individual evaluations
The H2stations.org (www.H2stations.org) website – now in a new design – uses interactive maps to globally list all hydrogen refuelling stations in operation, planned, or already shut down including a summary on recent changes. With its information on already closed stations, H2stations.org is unique in also providing a view on the development history of the hydrogen infrastructure.

The website draws on an extensive database which has been continuously updated since 2005 with new stations as well as with extensive additional information on already existing sites. All in all, it currently contains detailed information on more than 1100 refuelling stations globally. “We continue to provide basic information free of charge for non-commercial use”, says LBST Managing Director Uwe Albrecht. “We offer commercial users to license the data including further detailed information, regular reports on new developments, and bespoke analyses.”

Ludwig-Bölkow-Systemtechnik GmbH, an associated company of TÜV SÜD AG, is an international expert consultant for sustainable energy and mobility. With its expertise bridging technologies, markets, and policy the company supports international clients from industry, finance, politics, and non-governmental organisations with questions about technology, strategy and sustainability. Large international companies trust LBST’s reliable assessments of new developments and innovations in the fields of energy management and mobility. Over three decades of continuous experience from the interdisciplinary team of renowned experts form the basis of LBST’s extensive expertise. Further information: www.lbst.de

More about hydrogen and hydrogen projects on this website