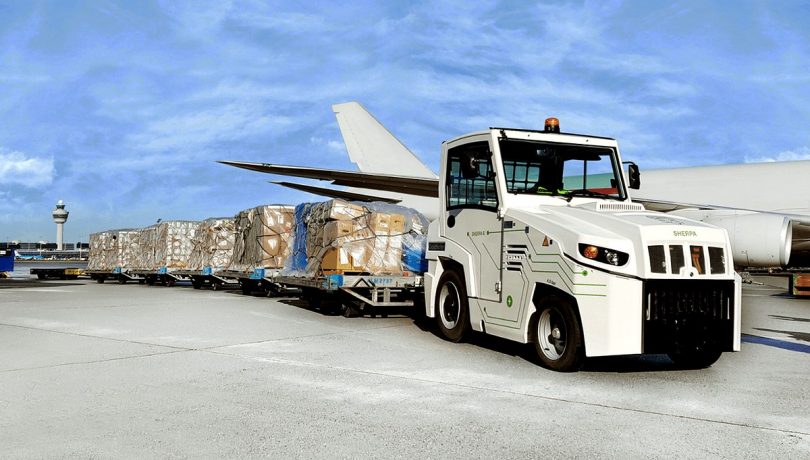 Suncar HK and Goldhofer group developed a powerful Li-Ion battery-powered baggage and cargo tow tractors. The »Sherpa« E is currently being tested in use at airports all over the world.

As in many other sectors, electric mobility is gaining importance, especially in the airport industry. Numerous airports, such as Frankfurt airport with its project »E-Port AN«, have set ambitious goals regarding their ecological footprint. As a result, the use of emission-free vehicles at airports is constantly increasing.

As part of a platform strategy, Goldhofer, provider of solutions for heavy-duty and oversized cargo haulage, has subsequently decided to not only offer a diesel, but also a fully electrical version of its baggage and cargo tow tractor »Sherpa«. The battery-driven »Sherpa« E has been developed together with Switzerland’s Suncar HK.

In October 2017, the »Sherpa« E was presented to the public at the inter airport Europe in Munich for the first time. Since then, it has been extensively tested in daily use at four different European airports. The tests have been a real success.

The »Sherpa« E differs from conventional electrical tow tractors because of its battery technology. Instead of the usual lead-acid battery, the »Sherpa« E is equipped with a Li-Ion battery. Unlike leadacid batteries, Li-Ion batteries can be charged in closed rooms and allow fast charging of only one hour instead of the usual eight hours. A special charging infrastructure is not necessary thanks to the on-board charging technology of 22 or 44 kW.

On top of that, maintenance is reduced to a minimum. These and other comfortable features are offered by the jointly developed »IonMaster« technology, which is used in further, already ongoing, development projects.

Apart from the benefits of the battery technology, the »Sherpa« E delivers high performance in use. With a maximum towing capacity of up to 80 t, it can not only tow baggage, but also cargo at an efficient speed.

Further information: Suncar HK AG. Suncar HK is a spin-off company of ETH Zurich and a subsidiary of Huppenkothen Baumaschinen