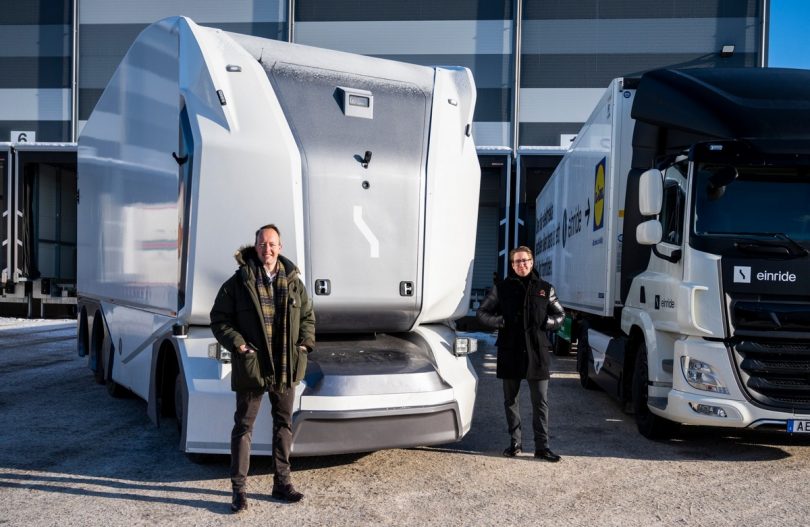 [Einride] – Freight mobility pioneer Einride and food supply leader Lidl are commencing operation of a new, connected electric transport system that the companies have developed together since April of last year. The launch is an important step in the strategic innovation collaboration that the companies initiated in 2017 to electrify and automate freight.

Since the start of the partnership, Lidl and Einride have had the ambition of both electrifying and automating deliveries from Lidl’s central warehouse to its stores. The electric transports will operate from Rosersberg outside Stockholm, which will eliminate emissions and reduce costs compared to diesel trucks. As part of the system, electric trucks equipped with Einride’s control and monitoring software will travel 324 km per day making deliveries to five stores in the Stockholm region, with an average of 104 pallets per store.

“We intend to be the industry leader for sustainable and fossil-free transport by 2025, and our first all-electric truck from Einride is just the start of a major transformation. In the coming years we hope to be able to increase the proportion of intelligent, electric freight significantly. With electrified transports – in combination with new solutions for cooperation, planning and digitization – we expect to be able to reduce both costs and environmental impact,” says Carl Ceder, Logistics Manager of Lidl Sweden.

The plan is long-term, with 2025 as the first major milestone. By then a significant proportion of all deliveries will take place with electric vehicles and the hope is that a large part can also take place without a driver.

“This shows the industry that the transition to more sustainable and cost-effective shipping can easily begin today. The technology is here, and with Einride’s mobility platform you secure the future of your deliveries with electric and autonomous transport. We are proud of our strategic partnership with Lidl, which drives innovation and builds a world-class logistics system,” says Jonas Hernlund, Chief Commercial Officer (CCO) of Einride.

Lidl already works with a smart logistics system based on centralized warehouses. In addition, each truck is filled to 93 percent, which means that the food chain can keep the number of deliveries down to only one per day. After commencing operations in Rosersberg, the number of electric and eventually autonomous vehicles will scale according to the terms of the partnership.

Einride is a Swedish technology company that develops and provides freight mobility solutions based on electric and autonomous vehicles, leading the transition to sustainable transport. It was founded in 2016 by Robert Falck, Linnéa Kornehed and Filip Lilja, and became the world’s first company to operate an autonomous, all-electric freight vehicle on a commercial route on a public road with its groundbreaking Pod vehicle. Today, Einride operates the largest fleet of electric trucks in Europe with major multinational partners, and recently set a speed record with the Pod at the Top Geartrack in the U.K.