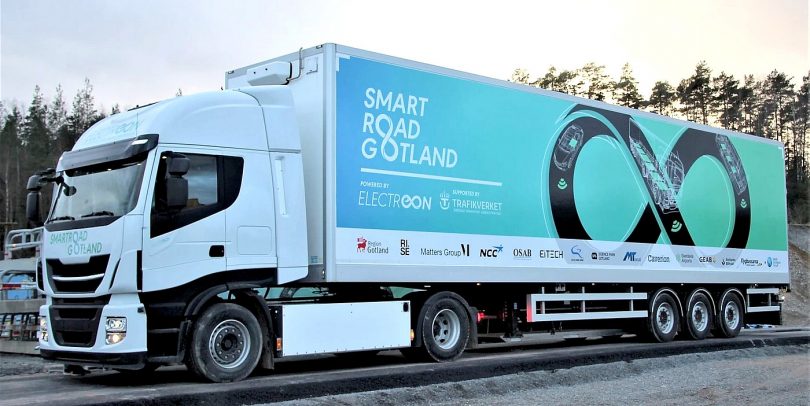 [Electreon] – Electreon announced that on March 15th, 2020 it completed a test of dynamic wireless charging of a 40 ton long haul electric truck equipped with receivers developed by the company. The test was conducted on the company’s infrastructure deployed in a public road between the airport and the town of Visby on the Swedish Island of Gotland.

The test took place in winter conditions of rain and snow that accumulated also on the road and the temperature was around 0°C. The test verified the full functionality of the coils after being installed during one winter since deployment in November, meeting the requirements of the Swedish transport authority.

The test took place for a week and a half in which the system operated on and off for six days. A management unit was installed on the side of the road, connected to the electric grid and the coils under the road. Initially, the communication with the coils was tested and then the static charging of the truck and five receivers. Finally, the system was tested for dynamic charging of the truck on a 50 meters section. The system was automatically operated and remotely monitored bythe control room through cellular.

The results of the test are satisfactory, the system operated while the truck was on the move and all the receivers functioned. At this stage, the company limited the energy transfer to 45 kW and the speed to 30 km/h, During the coming months the transferred power and vehicle speed will be increased gradually in order to reach the goal of 125 kW and highway speed.

According to the company’s knowledge this is the first time ever that a long haul electric truck was charged wirelessly from a public road while driving. The results of the test is an important milestone for the project funded by the Swedish Transport Administration.

Smartroad Gotland is an e-road consortium led by Electreon AB, a wholly owned subsidiary of Electreon Wireless. To enable the mission-critical knowledge transfer to the Swedish Transport Administration, Smartroad Gotland will deploy a fully functional public shuttle service and test bed through a 1.6 km long electric road as part of the total route of 4.1 km between the airport and town center of Visby on the idyllic island of Gotland, an eco-municipality in the middle of the Baltic Sea.

As an integral strategic step towards implementing the Swedish government’s national roadmap for electric road systems, Smartroad Gotland will create a vital learning curve for the authority. Long haul heavy truck fleets benefit significantly from the Electreon solution since no heavy and costly batteries, nor stops for charging, are needed.