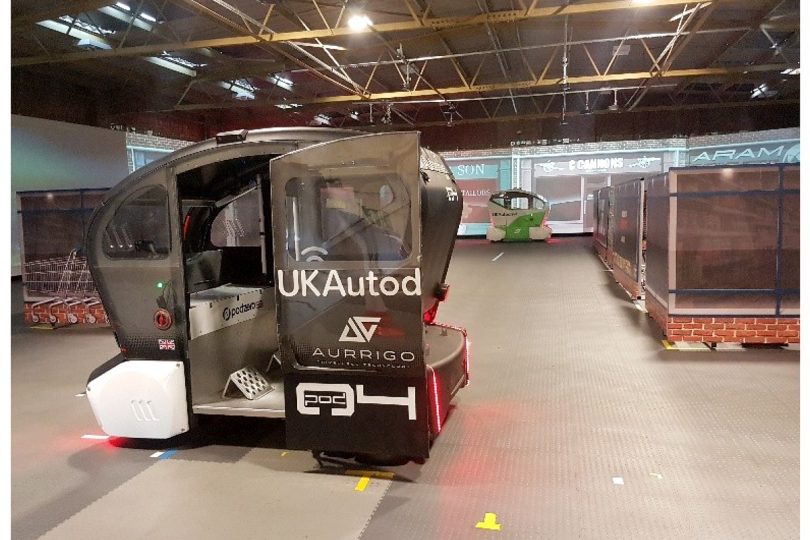 Vehicles used during this study. ©_University of Warwick

Passengers and pedestrians confidence and acceptance will be key to the future and development of autonomous vehicles so researchers at WMG at the University of Warwick have just conducted and reported an experiment to see which autonomous vehicles driving style engendered the highest levels of confidence among autonomous vehicles passengers – driving with full machine efficiency, or driving in a way that emulates average human driving. The surprising result was that neither was optimal but that a blend of both might be best. 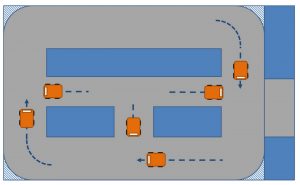 Diagram of the arena showing the interactions at the three T-junctions, where the vehicle going straight had priority.

The researchers took 43 volunteers into a large warehouse designed to resemble a pedestrianised area in a town centre with a series of routes that included a range of junctions. Half were given 4 journeys around the route in an autonomous vehicle driving with full machine efficiency using all its capabilities to drive in as safe and efficient manner as possible while the others were given 4 journeys around the route in autonomous vehicles that tried to closely emulate average human driving patterns. They then scored the level of trust in the autonomous vehicles. The result has have just been published in the journal Information (2019, 10, 219; doi:10.3390/info10060219).

The overall result was that there was only a marginal difference in trust between the two driving methods. The efficient machine method was slightly favoured but even that small gap between the two driving styles narrowed over the four runs. What was noticeable for both the “machine” and “human“ driving styles is that confidence in both grew with each new round suggesting that simple familiarity and growing accustomed to the experience will be one of the most effective ways of quickly building trust and acceptance of autonomous vehicles once their use becomes more widespread.

Dr Luis Oliveira from WMG at the University of Warwick, lead author on the paper, said: “The overall trust in both driving methods grew with every run. In the machine-like driving style this was steady upwards curve throughout the four journeys but in human-like behaviour there was a particularly steep change upwards in the scores between runs 2 and 3. The passengers in the experiment also acknowledged that future generations may be more comfortable with AVs and its features, as they learn to live with the new technology.”

The researchers also asked the participants to give some narrative about their experience and this showed that there were advantages on both modes of driving that may therefore need to be blended together in any future final package. The researchers’ literature review and warehouse experiment made clear that there were two particularly clear lessons to be learned:

WMG’s Dr Luis Oliveira said “this shows that the challenge is that the speed and trajectory of autonomous vehicles should be finely controlled, but at the same time the vehicle should be assertive to provide the benefits of automated driving.

However it was the AVs’ behaviours at junctions in the WMG University of Warwick warehouse test that produced the most diverse and surprising reactions.

The machine driven AVs were left to make use of all of their sensors and ability to communicate with vehicles that may out of line of sight to decide whether to enter a junction. If their sensors said it was safe and their communications with other vehicles indicated no approaching threats they would simply enter the junction without stopping. If however they detected a vehicle that they believed should have right of way – even if it was not yet visible to the human passengers they would stop and let that vehicle pass. In contrast The AV’s emulating human driving would always stop at a junction and would even edge into the junction as if the peek at what the oncoming traffic might be.

The reactions to those two different approaches were very varied and surprising.

Some also liked the machine driving approach of stopping at junctions even though there was no visible issue but because it was in communication with another out of sight vehicle that it perceived had right of way. One passage said: “it stopped at a junction, because I assume it knew that something was coming, as opposed to it reacting to seeing something coming”.

Equally there was dislike for both the human and machine driving methods of handling a junction.

Some perceived problems with the machine approach of just entering the junction if it believed it to be clear to do so with one saying that they were concerned about vulnerable road users. “..such as pedestrians or cyclists that could have been there that don’t communicate with the pod. That may be a safer way of doing it rather than flying around the corner”.

However others were greatly surprised at the “human” driving method AV stopping at every junction as they saw it not just as waste of the machines capabilities to scan and communicate ahead to understand traffic. They were frustrated that the vehicle was not “more assertive” One passenger saying “sometimes I didn’t expect it to stop, because I thought the other pod was a bit further away but then it did, so I guess it’s cautious…if I was driving I’d probably have gone”. Another passenger said “If I was in an autonomous pod with sensors giving a 360-degree view at all times, I’d expect the vehicle to instantaneously know whether it was safe or not, and not need to edge out”.

A further passenger who tested the human-like version, commented that a machine driving like a human and trying to look around the corners seemed ironically unnatural saying: “I think it was a bit unexpected because my expectation with the pods is that that there would be some un-naturalism to it rather than a human driver”.

Despite this seeming mass of contradictions in views about how AVs should handle junctions the research team do think there are valuable lessons to be learned even here. In particular: