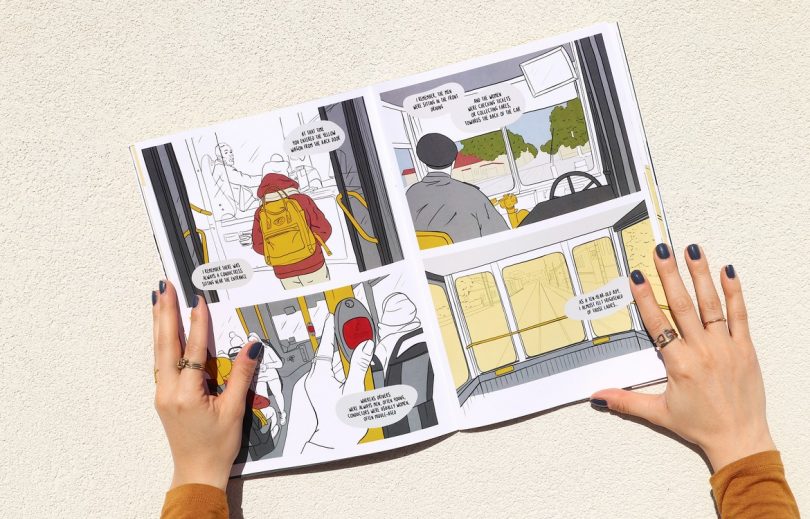 [Åbo Akademi University] – A new comic by Giada Peterle combines the history of public transport in Turku, Finland, with citizens’ perspectives from different points in time. The comic book “Lines” creates a story based on narratives by the city’s inhabitants, and shows how public transport has changed since the end of the nineteenth century.

The comic book “Lines” presents its reader with diverse perspectives in order to understand the way public transport in Turku, Finland, has changed throughout the years, and what these changes have meant to the city’s inhabitants. The aesthetically pleasing narration is created from geographical research based on both archival material and interviews with residents.

The author of the book is Italian cultural geographer and comic book artist Giada Peterle, working at the University of Padua, Italy, and specialized in the narrativization of urban landscapes through creative interventions. The research has been done within the project PUTSPACE – Public Transport as Public Space in European Cities: Experiencing, Narrating, Contesting, with the fieldwork being done while Peterle was a visiting scholar at Åbo Akademi University in Turku in 2020.

“This comic considers both individual and collective perspectives, following changes across space and time from when Turku built tramlines to when these were replaced by buses. It investigates Turku’s past and present public transport as a dense example of how urban complexities and diversities are able to cross and meet in public spaces, and presents the results in a way that also speaks to a non-academic audience,” says Peterle. “In Turku, as in many other European cities, public transport networks are narrative archives that ask to be explored.” 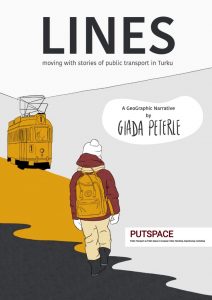 The history of the tramlines in Turku is no straightforward affair. The last line was closed in 1972, but it is still an important part of public memory. The possibility that a new tram network might be built has been the subject of much debate during recent years. The multiple voices in “Lines” recognize this complexity and help the reader understand that public, urban spaces are an expression of diversity, and grasp the importance of linguistic, cultural and religious diversity in public space.

PUTSPACE is a research project that examines public transport as one type of public space, and how public transport confronts citizens with social diversity. One of the objectives is to contribute to urban planning discussions. “PUTSPACE challenges existing definitions of public space, working to humanize transport research by looking at narratives, contestations and experiences surrounding public transport,” says Jason Finch, Principal Investigator for Finland and Associate Professor of English Language and Literature at Åbo Akademi University. “‘Lines’ uses storytelling and emotional connections to connect the debate over public space with a broader audience – members of public transport’s many different publics. As a creative production it shows how the infrastructures of the past can have a role in the present and future of a city.”

PUTSPACE is financially supported by the HERA Joint Research Programme which is co-funded by AKA, BMBF via DLRPT, ETAg, and the European Commission through Horizon 2020.

Readers can read the comics story at http://narrativegeographies.com/lines/ or download the e-book at https://www.beccogiallo.it/. The comic book “Lines” can also be bought from Turun Sarjakuvakauppa on Humalistonkatu 8 B in Turku for 10 euros.

Giada Peterle will publish a new book, Comics as a Research Practice: Drawing narrative Geographies Beyond the Frame (Routledge) in May.