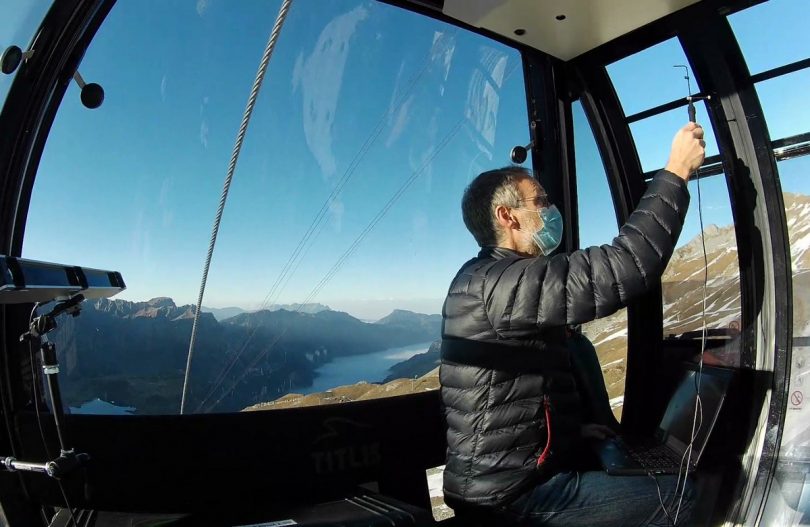 [Empa] – Covid-19 is difficult to assess, and complex mathematical models to quantify infection risks are ultimately attempts to approximate reality – also in the case of ski resorts and the many people who hang out on the ski slopes. This is why a team led by Ivan Lunati of Empa’s Multiscale Studies in Building Physics lab began its work in precisely this reality: in the cable cars and cabins of the Engelberg-Trübsee-Titlis ski resort.

To explore the air exchange factor, which is known to play an important role in the spread of pathogens, the researchers conducted on-site measurements. They examined three types of cabins: a smaller one called Omega 3 with a volume of just over five cubic meters for a maximum of eight passengers and two larger cabins with space for 80 and 77 people, respectively, and a volume of just under 40 and just under 50 cubic meters.

Air flows through the windows live
The Empa team first used a mobile system to explore how the air moves in these vehicles: In collaboration with the company Streamwise, air pressure sensors were used to record the spatial distribution of the flow in real time. From this data, the researchers then calculated air exchange rates for the respective cabin types.

Measurements of CO2 concentrations, considered a good proxy for indoor air exchange, were aimed in the same direction. During trips in the smallest cabin from the valley to the mountain station at an altitude of just over 2400 meters, two sensors – at head and belly level – recorded the concentration of the gas. The result: If both sliding windows on the right side of the cabin were closed, the CO2 concentration increased almost linearly to the next stop, when the doors opened again. If one of the two windows was open, the CO2 increase was significantly lower. And with two windows open, the value quickly stabilized around 500 ppm, or parts per million, after an initial value of 400 ppm, corresponding to ambient air.

Although the CO2 measurement campaign is still ongoing, it already confirmed the results of the air pressure measurements. More specifically, the air was exchanged 138 times per hour in the smallest cabin, 180 times in the medium-sized cabin – and only 42 times in the largest cabin. According to Ivan Lunati, the cause for the reduced rate in the largest cabin is the hinged windows in the roof of the cabin: “In contrast to the other cabin types, the air flow through the airstream is very sensitive,” he explains. “There are more complicated flow conditions there, which make the air exchange less efficient.”

At first glance, a rate of 42 air changes per hour may seem low, but a comparison with other indoor settings sets the impression somewhat straight: In a train, seven to 14 air changes take place, and in an average two-person office, only about one air change per hour. Therefore, in cable car cabins, open windows clearly help to reduce the risk of high aerosol concentrations.
However, what about pathogen emission rates? It is a tricky point, Lunati says, because some of the properties of Sars-CoV-2 are still poorly understood. Moreover, the emission rate is known to depend on the behavior of an infected person. Does he breathe calmly, or is he so strained from skiing that he snorts violently? Does he laugh, speak – and if so, loudly or softly? According to Lunati, good data on this is currently scarce. In addition, the physics of how droplets and aerosols spread in a room are not fully understood.

In order to mimic reality as close as possible, the Empa researchers improved the calculation models that are often used for estimating virus outbreaks and used them to develop their own estimate. In doing so, they also took into account the infection rate within the overall population – i.e. the probability that one, two or even more virus carriers are present in a cabin. A simple numerical example for a cabin with five people: If the virus infects 0.1 percent of the population, the probability that one undetected infected person is present would statistically be around 1 in 200 – and 1 in 10,000 that two infected people are in the cabin. If 1 percent of the population were infected, this probability would increase to 1:20 for one and 1:1,000 for two infected persons in the cabin.

An infection rate of 1 in 100 people is quite realistic as a peak value during a pandemic, says Lunati; it also corresponds to the results of a recent mass testing in the canton of Grisons. Under these assumptions, a real-world scenario, in which 80 people fully occupy the cabin, would of course be more delicate. According to the Empa experts, the probability of one person in the cabin being infected without being detected is around 36 percent, and for two infected passengers around 14 percent.

Dinner, office or cable car? Risks in comparison
Using these and other factors, such as the time it takes for pathogens to become inactive, the researchers first calculated infection risks for susceptible people in the cabin – and from this, finally, the risk for all passengers. The most important parameters are the air exchange rate, the number of infected persons per air volume and the overall travel time. The results for a smaller cabin (eight people, open windows) can be illustrated by a comparison with other locations. 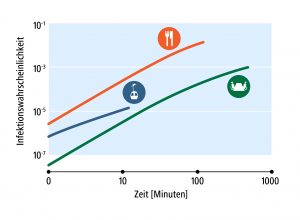 A dinner event on 30 square meters with eight people talking loudly would be massively riskier. The risk of infection during a 12-minute trip in the smaller cabin is also significantly lower than during an 8-hour workday in a 20-square-meter office for two, with an air exchange rate of once per hour. Thus, if cabin windows are left open, a day of skiing with a few cable car trips results in a significantly lower risk of infection than a full day of work in a two-person office with little ventilation.

The Empa researchers’ estimates were initially designed for a “no masks” scenario. “We wanted to determine the pure risk of infection from spending time in cable car cabins,” Lunati explains. “When worn properly, masks reduce the risk according to their respective filtering performance. They protect very well, especially against larger droplet transmission, for example, through talking.”

Fewer passengers = lower risk
What specific recommendations can be derived from the new findings? In addition to the obvious advice of “Please ventilate!” it is also worth limiting the number of passengers per trip. “This is already done in ski resorts anyway and is definitely a good strategy,” says Lunati.

In any case, such information should be useful for cable car operators. “The cooperation with Empa enables us to obtain professional and independent measurement data,” says marketing manager Urs Egli of Titlis Bergbahnen. “We appreciate this cooperation very much. And given the current situation, it is even more valuable for us.”

Cough in the sights of science
In future, the Empa researchers want to further refine their computational models or even develop completely new approaches to get even closer to reality. They also want to improve the data basis for the spreading of the virus – with a specially designed “cough machine” developed in their lab. From two cylinders, comparable to the lobes of human lungs, special compressed air enters a “head” via hoses: heated to body temperature, enriched with moisture and droplets, the spread of which is then recorded by two cameras – also suitable for testing future protective masks.

Talks about cooperation are already underway with Olten-based cable car manufacturer CWA, which has been following and supporting Lunati’s research. “The topic of air exchange has so far been treated rather stepmotherly,” says Massimo Ratti, CWA’s Chief Technical Officer. Data such as the ones from Empa would be really helpful – not only in the current situation, but also with regard to future cable cars in public transport. After all, the demands there are even higher than in ski resorts, explains the expert: “We would be very interested in participating in a research project for cabins with an even better air circulation.”