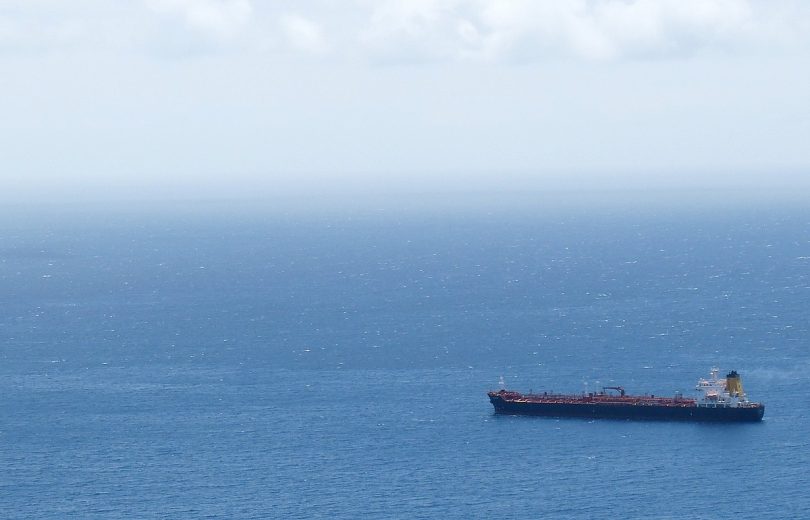 [SINTEF] – Relatively simple adaptation could make the cargo ships of the future completely green. The technology is based on the chemical compound ammonia, some extensive number crunching and one or two engine modifications. | By Christina Benjaminsen/NorwegianSciTechNews

SINTEF research scientist Andrea Gruber crunches numbers, albeit with the help of the supercomputer “Betzy”. A seemingly infinite string of calculations is now answering open scientific questions about how a widespread and long-established chemical substance -ammonia- may help the shipping industry to become climate-friendly.

It is becoming increasingly evident that ammonia has the potential to be a very convenient and viable alternative fuel for use across a range of applications.

Firstly, ammonia can be produced in an environmental-friendly fashion either by using renewable energy sources or, alternatively, from natural gas reforming by incorporating carbon capture and storage (CCS) in a well-established chemical process that is perfectly suited to CCS.

Furthermore, ammonia remains liquid at room temperature and moderate pressures, for example in ordinary gas cylinders. In comparison, the climate-friendly alternative hydrogen needs a temperature below minus 253 degrees Celsius and significant infrastructure to ensures it remains liquid.

Finally, we already have both well run-in production facilities and distribution networks available for ammonia. Hence it would be relatively straightforward to adopt it as fuel across the world.

The biggest disadvantage with ammonia is that people may find even small leakages disturbing because of its unpleasant and pungent odour and the irritating effect it has on our mucous membranes. Moreover, as it is the case with many other chemical substances, exposure to high concentrations of ammonia for prolonged time periods is lethal.

For these reasons, researchers believe that ammonia is most suitable for use in cargo ships or other vessels without passengers and operated by professional crews. The expertise is already available, thanks to a large fleet of reefer vessels that use ammonia for refrigeration of perishable foods or tankers transporting ammonia itself as main cargo.

Additionally, due to the already widespread use of ammonia in agriculture, it is also envisaged that some agricultural machines and tools could be powered with ammonia in the relatively near future, given the targeted utilization in the open and uncrowded countryside.

Presently, 90 per cent of all container ships are fuelled by heavy fuel oil (HFO). On a long journey a large vessel may emit around 5,700 tonnes of CO2. The combustion of heavy fuel oils also emits large amounts of pollutants such as oxides of nitrogen (NOx) and sulphur (SOx), as well as particles of soot and other chemicals that are harmful to humans, animals, and the environment.

“In comparison, such a journey would produce almost zero emissions of greenhouse gases and pollutants if ammonia was used to fuel an appropriately redesigned engine,” says Gruber.

Waste-heat from engine can play a key role
Because pure ammonia does not burn well and is difficult to ignite, researchers propose to use waste heat from the combustion process to partially decompose the ammonia.

The ammonia molecule consists of one atom of nitrogen and three of hydrogen. Its partial decomposition is straightforward to obtain at moderate temperature (~400 Celsius) and results in a fuel consisting of ammonia, nitrogen, and hydrogen.

The hydrogen content of the fuel helps to initiate the combustion process and accelerates it to ensure complete consumption of the available fuel (combustion efficiency). This ultimately provides propulsion through the well-known thermal process of the internal combustion engine that exploits large volumes of freely available air from the surroundings to boost power output.

“The fact that the working medium in the combustion process is air makes scaling up the process relatively simple and inexpensive, and adaptable to even the largest cargo ships. Scaling up is more difficult in the case of vessels powered by batteries or fuel cells,” says Gruber.

The potential for scaling up makes the concept perfect for larger vessels which at present are often fuelled by polluting heavy fuel oil, according to the SINTEF research scientist. He is also a professor at the norwegian university NTNU, working in the same field in close co-operation with several students.

“In contrast with the electrochemical process in a fuel cell, which is also an interesting option in smaller ships, all thermal power cycles, including the internal combustion engine, effectively exploit the working fluid -air- to its full extent, rather than only its oxygen fraction (around 22 per cent),” Gruber adds. 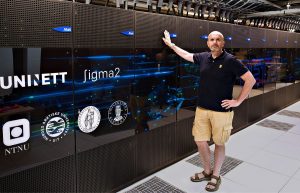 Millions of billions of calculations and useful waste heat
The supercomputer Betzy is part of Norway’s e-infrastructure for large-scale data- and computational science and it is installed at the NTNU campus in Trondheim. In this case, Betzy is a key research tool that help researchers understand how to achieve optimal combustion of ammonia. The powerful computer, which started its number crunching at the end of 2020, can carry out millions of billions of calculations per second.

In practice, Betzy has increased the computing ability of Norwegian researchers fivefold and its overall computing power is equivalent to that of 43,000 “ordinary” laptop computers.

“Or to put it another way: With an ordinary laptop it would have taken 1,168 years to perform the simulations involved in this project. Betzy does the job in ten days if the entire machine is used,” says Jenny Andrea Amundsen, a senior consultant at Sigma2, the company operationally responsible for Betzy.

In this specific case, the numerical simulations have used approximately 80 million computing hours over a period of about three months between December 2020 and February 2021. In terms of mere electricity consumption this is equivalent to 460 megawatt-hours that is converted to heat in the processor core.

The good news is that excess heat generated by water-cooled Betzy is used locally to heat surrounding buildings belonging to the NTNU university campus.

Comparison with natural gas and hydrogen
Results from the numerical simulations performed on Betzy show in detail how ammonia burns (virtually) in a small but representative portion of the engine’s combustion chamber and how it compares with natural gas or pure hydrogen.

The research shows that under relevant operating conditions, pure hydrogen is far too reactive as a fuel and tends to ignite too early, whereas ammonia does not ignite readily nor burn rapidly enough.

“Hence, neither of these fuels is suitable for internal combustion engines. However, by making use of waste-heat from a ship’s engine that is often just discarded, ammonia can be partially decomposed on board, resulting in a fuel mixture of ammonia, hydrogen, and nitrogen,” the SINTEF researcher explains.

Such a process is very convenient for two reasons: Firstly, waste-heat from the engine is exploited to enhance the energy content of the fuel, thereby improving the overall efficiency of the engine cycle. Secondly, the combustion properties of the new fuel mixture of ammonia, hydrogen and nitrogen become very similar to those of “standard” natural gas.

“This is important because it means that, in principle, it could be possible to adapt engines already deployed in the existing fleet to burn a carbon-free fuel mixture,” says energy researcher Andrea Gruber.

Next comes laboratory testing
Gas engines are already on the market and, when these simulations are completed and analysed, researchers will have obtained extremely accurate data that is needed to guide the redesign of existing engines to run on climate-friendly ammonia. These calculations help us on the way to phasing out the climate villain, heavy fuel oils, from the shipping industry.

“In the past, we’ve done a lot of work on the numerical simulation of a wide range of combustion processes, but this has always been conditional on some form of cooperation with research institutes in the USA that have had early access to the computational resources needed. However, the novel feature introduced by a supercomputer like Betzy in this kind of cooperation is that now, at last, we can perform the numerical simulations directly here in Norway, increasing our direct contribution to the scientific advancements,” says Gruber.

Today, we still join forces with leading research groups in America and, as an example, the long-term collaboration between SINTEF and Sandia National Laboratories focuses on development of computational tools devoted to this very topic.

The simulations make it so that the number of experiments and verifications in the laboratory testing phase can be reduced, but physical testing must in fact also be conducted before the ammonia-fuelled engine can actually become a commercial product.

“The simulations give us clear indications on what needs to be adjusted in the combustion engine so that it’s able to run on ammonia. This saves a lot of time and money in the engine development effort”, says Andrea Gruber.

Solving the turbulent combustion riddle
Direct Numerical Simulations (DNS) are normally performed as massively parallel calculations using thousands of computing nodes and tens of thousands of processors. In performing these simulations, researchers have used computing resources of an order unequalled in a Norwegian context.

In practice researchers simulate how dozens of chemical species react with each other in hundreds of elementary reactions – in a turbulent combustion process for different types of fuels. 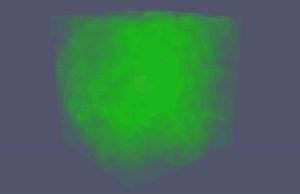 Animation of the flame (red) burning through the turbulent mixture of ammonia, hydrogen and air (green). The calculation is performed in a small (1 cm3) but representative proportion of the entire combustion chamber by solving differential equations on almost 1 billion points. Animation: Andrea Gruber / SINTEF

“What we already know is how a certain combination of fuel and air burns in an unperturbed flow without turbulence. However, turbulence occurs as an inescapable fact in any practical application of the combustion process. It is essential to obtain additional and more accurate information regarding this to optimise engines with respect to the utilisation of fuel and reduction of emissions. This, however, also calls for enormous computing power,” says Gruber.

Norway is a well qualified testground
Gruber hopes that this concept will provide opportunities to Norwegian industry and enable a quicker green transition at sea.

“Norway is in a particularly advantageous position to establish an ammonia-based value chain”, he says “Geographically and historically we are a maritime nation and our commercial shipping and ammonia production sectors have been in existence for more than a century. We have important natural resources in the form of plentiful wind power and natural gas that, with the help of carbon capture and storage (CCS), can contribute to the production of clean ammonia. We also manufacture our own, state-of-the-art internal combustion engines for marine applications”, says Gruber.

Facts about Betzy: Betzy is Norway’s most powerful supercomputer, owned and operated by Uninett Sigma2 AS as part of the national e-infrastructure for research and teaching. The supercomputer is named after Mary Ann Elizabeth (Betzy) Stephansen, the first Norwegian woman with a doctorate in mathematics. The powerful calculator, inaugurated at the end of 2020, can perform millions upon billions of calculations per second (6.2×1015 FLOPS) Betzy was inaugurated at the end of 2020 and consists of 1344 AMD EpycTM-based computing nodes with a total of 172032 processor cores. The computing nodes exchange data with each other using an extensive network of very fast connections. . Betzy is physically located at Gl?shaugen in Trondheim, and operates Sigma2 in collaboration with the four oldest universities in Norway – NTNU, UiO, UiB and UiT.